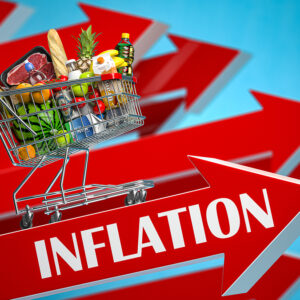 With the Consumer Price Index released on Wednesday showing a 6.2 percent increase over the last 12 months, inflation is now at a 31- year high. Wholesale prices are also rising, up 8.6 percent since this time last year.

What does that mean for families in the Delaware Valley?

Deanna Doane, president of the Wayne Business Association, said her members are seeing prices rise every day and have no choice but to pass costs on to their customers. For restaurants the price of food is higher and so is the cost of labor, she said.

“Now we are going to have to increase prices and that hits the local community. We are a restaurant town and it’s very hard for restaurants. (Inflation) makes it hard on small businesses,” said Doane, who owns Click Canyon Digital Marketing.

“Inflation is the cruelest tax as it hurts everyone, everywhere, every day,” said Guy Ciarrocchi, president of the Chester County Chamber of Business & Industry and a Republican candidate for governor. “It’s been caused by very bad decisions—like stopping American energy production. It reduces the supply and forces us to import. That hurts us at the gas pump and heating our homes.

“Gov. Tom Wolf has made things worse by creating a workforce shortage, critics say. That also harms the supply chain and causes prices to go up—and gives consumers less selection. This government-caused problem must be fixed by government—now—so that private citizens can move on with our lives,” Ciarrocchi said.

“The fact that inflation is at the highest level in decades should be no surprise to anyone,” said Benefield. “That’s what happens when the government prints more money to fund massive deficits. Voters are increasingly aware of the consequences of “free money”—higher prices, smaller packages, and shortages, all of which hurt low-income households the hardest. Policymakers—at the federal, state, and local levels—need to act now to rein in government spending to protect working families.”

“This bill, the infrastructure bill, will be an economic engine,” said Dean. “It will relieve inflationary status right now…As we do invest in infrastructure, the supply chain problems will be eased.”

Republican Christian Nascimento, who is running for Dean’s seat, thinks Dean’s stance runs against basic economics and real-life experience. “People are finding that stores are out of stock on goods, and what they do have is more expensive than ever.  When consumers spend more on everyday goods, they have less money to save for an emergency. That puts families in a precarious position and can keep people from rising to the middle class.

“The local businesses that I speak with every day are being forced to raise their own prices due to their cost of goods rising – and that’s assuming that they can find employees to help them remain open. All that the (Biden) administration and members of Congress have been able to do lament high gas prices and suggest that we lower our expectations and consider this a ‘new normal.’

“My fear is that all of the impending and proposed government spending will make this situation that much worse, and continue to increase prices in anticipation of a flood of spending, without a significant improvement in the supply chain,” Nascimento said.

And David Galluch, a Republican candidate for Congress in Delaware County, said, “Inflation is taking its toll on everyone. Last month we saw the largest jump in prices on a yearly basis, 6.2 percent, in over 30 years. People are paying more for food, more for gas, and more for daily essentials they can’t live without. Growing up with a single mom, who worked two jobs most of my childhood, I know first-hand how hard these price increases are on all of us.

“Unfortunately, this spike in inflation may very well climb due to President Biden’s intention to increase government spending further. If he and Congress continue on their current course, inflation will continue unabated and the Fed may eventually need to raise interest rates sharply to counteract inflationary pressure. At that point, we risk a recession, which would further compound the pain American families will feel,” Galluch said.

Jeff Bartos, a Montgomery County businessman who is running for the U.S. Senate, agreed the Biden administration is to blame.

“As a direct result of Joe Biden’s disastrous economic policies, inflation is running away to record highs and is impacting Pennsylvania families every day,” Bartos said. “From the grocery store to the gas pump, working families are feeling the devastating effects of the Biden administration’s inflation crisis. Whether you are running a small business or in charge of your family’s finances, your hard-earned dollars aren’t going as far, and the rising price of everyday necessities is impacting your life. Make no mistake, this is Joe Biden’s tax on Main Street businesses and working families.”