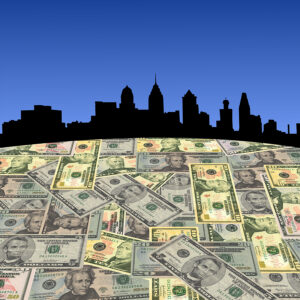 Could the Delaware Valley Be Facing Another Era of ’70s Style Inflation?

Talk of trillion-dollar government spending plans and tight labor markets is inspiring speculation of the dreaded “I” word — inflation — and bringing back painful memories of the Delaware Valley in the 1970s.

In Abington, 78-year-old Carol Gash remembers how she and her late husband, Dr. Arnold Gash, struggled to get a mortgage after moving to the Philadelphia area when Dr. Gash finished his Air Force service.

“Interest rates were well above 10 percent,” she told DVJournal. “They were sky-high. But my parents offered to give us a mortgage at 10 percent so we took it.” At their peak in October 1981, the 30-year mortgage hit 18.63 percent according to the Federal Reserve Bank of St. Louis. The Fed raised rates to combat the inflation that had been ravaging the economy for a decade. From 1974 to 1980, the annual inflation rate was 9.4 percent, topping out at 13.3 percent in 1979.

And it’s inflation, not interest rates, that has Gash worried today. The Wall Street Journal reports inflation — too many dollars chasing too few goods – accelerated in March due to a strengthening economy and rising energy prices. MarketWatch put inflation at a 2-and-a-half-year high.

“Since I’m on a limited income, it bothers me now more than it did then,” said Gash. “It’s costing me a fortune to feed my kid.” Her adult son is disabled and lives with her.

“It was crazy,” Fred D’Ascenzo, 67, of Newtown, said about that earlier inflationary era. “But I wasn’t worried. I knew it was cyclical.”

D’Ascenzo agrees with Gash about the mortgage rates. He and his former wife bought a house in Drexel Hill in the 70s and paid 14 percent interest. But if you had money in a money market account you could get 10 or 12 percent interest, he added. However, the high mortgage interest rates caused the real estate market to stagnate.

“To buy a house or a car, it was ridiculous, the price of a loan,” D’Ascenzo said. “Everything you bought, it was crazy how much it cost.”

President Gerald Ford campaigned against inflation with Whip Inflation Now (WIN) buttons, he remembered. In 1976, Ford was defeated for election by Jimmy Carter, another one-term president who couldn’t “whip” inflation, either.

But D’Ascenzo sees prices going higher nowadays, too, “especially for construction material, lumber, flooring. It’s not only creeping up. You can’t get furniture. It’s crazy.”

“I think inflation is one of the major concerns looking forward at the health of the American economy as we’re seeing so many dollars pumped into the economy through various levels of COVID relief measures,” said Jonathan Williams, an economist with the American Legislative Exchange Council (ALEC), a nonpartisan organization of legislators in favor of limited government, free markets, and federalism.

While the COVID relief bills may be helpful to a degree for unemployed individuals, Williams warned that with a national debt rapidly approaching $30 trillion, it is cause for concern.

“Numbers are certainly ticking upward,” Williams continued. “Anyone who has gone to the gas station to fill up their tank recently has noticed a precipitous rise in gasoline prices, and that’s just one example of a commodity that’s gone up in prices recently.”

“For those that have purchased lumber, aluminum, or copper for various home improvement projects, you’ve seen prices go up in those areas as well,” said Williams.

Not everyone is worried, however. At least one Federal Reserve president, Boston’s Eric Rosengren, does not expect inflation to rise in a worrisome way.

“As long as it is in the 2-2.5 percent range, which I think is highly likely over the next two years, I would not be particularly concerned,” Rosengren told The Wall Street Journal earlier this month. Still, that does not satisfy former Treasury Secretary Larry Summers. The former Clinton cabinet member believes the Federal Reserve should express more concern about the inflation outlook.

While a lot could happen between now and next year’s midterm elections, Williams thinks Democrats will bear the brunt of the blame if inflation does pick up too quickly. Democrats currently control the House, Senate, and White House.

“Right now, the numbers we’re seeing are on the higher end than we’ve seen recently, but still somewhat within the moderate range,” said Williams. “The other broader concern would be getting into a situation a la Japan where you have stagflation or even deflation in some cases.”

Stagflation, as explained by Investopedia, is characterized by slow economic growth and relatively high unemployment or economic stagnation which is at the same time accompanied by rising prices.

“So, I think you have to look at the real problem of a combination of a lack of economic growth and also combine that with inflationary pressures you get the stagflation certainly that we saw in the 1970s under Jimmy Carter and that would be the worst-case scenario I think for the American economy,” warns Williams. “That’s why proposals such as those to raise income taxes on businesses would be very damaging to the economy and would get us closer in that direction, I think, of the problem with stagflation with lower growth and higher inflation.”