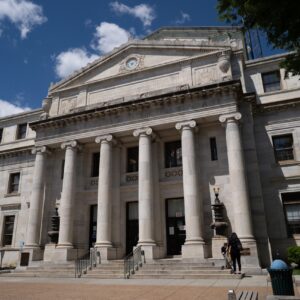 Bility, an 8-year-old girl, was leaving a football game on Aug. 27, 2021, when she was struck by bullets allegedly fired by officers Devon Smith, Brian Devaney, and Sean Dolan. According to a report from the Delaware County District Attorney’s Office, they began firing after they heard shots being fired nearby.

“Three Sharon Hill police officers were positioned opposite the area used by spectators to exit the stadium. As the gunfire erupted on Coates Street, a car turned onto Coates Street directly in front of the officers. We have concluded that the gunfire, combined with the movement of the vehicle, precipitated responsive gunfire from the Sharon Hill police officers,” the district attorney’s report said.

Steve Patton, a lawyer representing Dolan, said Judge Amoroso will either issue her ruling on the defense motion to quash the charges or simply have a status conference. The case is set for 1:30 p.m. Monday at the Delaware County courthouse.

“We’ve done that and trust the judge will make a good decision,” Patton said.

Bruce L. Castor Jr., the lawyer representing the Bility family, declined to discuss the case until after the judge rules.

Fanta was one of four people, including her sister, struck by police bullets during the shooting. The other three survived.

In July, Sharon Hill borough released a heavily redacted report from a law firm that it had hired to investigate the shooting.

“The first shooting incident that occurred that evening was between two individuals, A.J. Ford and Hasein Strand, who reportedly had been in attendance at the game,” the Sharon Hill report said. “Witnesses to the criminal investigation describe Ford as firing the first shots from a .45 caliber semi-automatic firearm from the area of 909 Coates Street west towards Ridley Street. He fired at least five times toward Hasein Strand.

“Strand then returned fire by shooting a 9mm semi-automatic firearm from approximately 919 Coates Street east towards the 800 block of Coates Street, where pedestrians were leaving the football game and where (the three officers) were positioned. One of the projectiles fired by Strand struck an unintended target,” the report said.

The borough council fired the three officers shortly after the incident.

“This is a sad day for our officers who face criminal charges for trying to do their jobs and keeping the community safe,” Joseph Fitzgerald, president of Fraternal Order of Police Lodge 27, said in January when the officers were indicted. “The FOP continues to support those fine officers and will provide a vigorous defense against these allegations. Our members have served the Sharon Hill community with respect and integrity and we ask the public for continued patience as this case moves through the criminal justice system.”

The district attorney’s office did not respond to a request for comment.