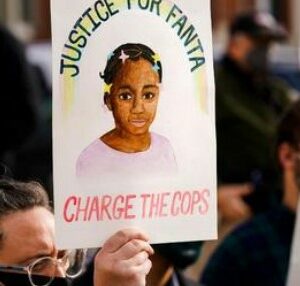 Fanta was among four people injured when the officers began firing toward a car that came around the corner after a group of young men began shooting at each other in the 900 block of Coates Street.  However, at the same time spectators from an Academy Park High School football game, including Fanta, were leaving the stadium and were caught in a hail of bullets. A fifth victim was struck by a bullet fired by one of the young men, the grand jury report said.

“This is a sad day for our officers who face criminal charges for trying to do their jobs and keeping the community safe,” Joseph Fitzgerald, president of Fraternal Order of Police Lodge 27 said in a statement. “The FOP continues to support those fine officers and will provide a vigorous defense against these allegations. Our members have served the Sharon Hill community with respect and integrity and we ask the public for continued patience as this case moves through the criminal justice system.”

Some Delaware Valley residents have also raised questions about how the officers are being treated.

“It’s a shame these fine officers are being used as scapegoats,” Haverford resident Richard Gallo said on Facebook. “Would never have happened if it was a Republican county and DA”—a jab at Delaware County District Attorney Jack Stollsteimer, a Democrat.

Soon after the incident, various groups, including Black Lives Matter and the NAACP, began demanding charges be filed against the three officers.

But retired Upper Darby Police Chief Mike Chitwood says he believes they were not treated fairly. He blames Stollsteimer.

“When I saw the DA, who I respect, when I saw he punted the case to the grand jury, I said, ‘These guys are going to be indicted.’ Because a grand jury can indict a hamburger.”

“The incident itself was a tragedy,” Chitwood added. “I accept that. It was a total out-and-out tragedy…In my opinion, the police, as tragic as it was, never went into work and said, ‘I think I’ll kill an 8-year-old girl.’ It never happened. But the way they’re being treated, with the indictment, the grand jury, now they’re being fired. Where’s the presumption of innocence? There is none. And that’s unfair. You wonder why police in America today don’t do anything? Because they don’t get the backing.”

Borough Council should have waited to act until after the trial, he said. Council President Tanya Allen did not respond to a request for comment.

“They didn’t give them that opportunity,” said Chitwood. “And, it’s all about what’s politically right. It doesn’t take away from the tragedy. It was a tragic event that happened because of a lot of different variables that played themselves out.”