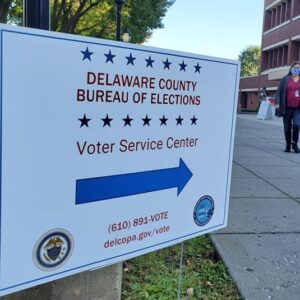 The head of the Delaware County Republican Committee is decrying widespread ballot shortages in GOP strongholds in Tuesday’s election and calling for an investigation into whether there was intentional voter suppression.

GOP Chair Tom McGarrigle says he believes hundreds of registered Republicans were affected as they waited in lines for new ballots to arrive or simply gave up and left their polling place. County officials printed too few Republican ballots while there was an adequate supply of Democratic ballots, he said.

In primary elections, voters received a ballot based on their partisan registration, as opposed to general elections when voters all receive the same ballot.

“They were running out of Republican ballots everywhere,” he said. The county, which has been governed by Democrats since their historic sweep in 2019, is not being competently run, McGarrigle claimed.

“This is the third election they’ve flubbed,” he said.

Not surprisingly, Jim Allen, director of the county Bureau of Elections, disagreed with McGarrigle’s assessment.

“The county’s ballot order not only complied with but exceeded the state requirements,” Allen said. “There are reports that turnout exceeded even those extra ballot orders in about 6 percent of the precincts. At all times, however, registered voters were able to vote on precinct equipment that generated paper ballots and emergency ballots as the county worked to print and deliver more paper ballots. The county regrets that some voters had longer wait times, and will exceed the state requirements even more for the November election.”

There were issues that drew much interest in Republican-leaning wards in Springfield, Ridley Park, Upper Darby, and other areas, he said. When officials at various polling places that ran short of Republican ballots called the County Board of Elections for more, there were long delays in printing and delivery. Poll workers even struggled to get someone at the county Bureau of Elections to answer the phone calls, McGarrigle said.

In some cases, the poll workers were told to just use the old touch screen voting machines instead of the paper ballots.

“It was voter suppression or complete incompetence. This needs to be investigated,” McGarrigle said.

The GOP county chair has asked the county District Attorney’s Office to investigate what went wrong. Otherwise, he said, he will go to the state Attorney General’s Office or the FBI.

McGarrigle saw lines of people still waiting to vote at 8:30 p.m. at Springfield High School, though the polls were supposed to close at 8.

“People were very frustrated,” he said. While the four statewide ballot questions drew some people to the polls, others wanted to vote in a contested Ward 6 Board of Commissioners race in Springfield and contested district justice races in Springfield and Morton, he said.

“There was a lack of effort to resolve this problem,” said McGarrigle. “It was only in heavily Republican wards.”

“It’s puzzling and, at the same time, very disturbing to me. We have spent an enormous amount of money on equipment and have added several additional employees to ensure fair elections where everyone is provided the opportunity to vote,” Byrne said. “I received many calls yesterday from angry poll workers and voters who felt disenfranchised by the lack of Republican ballots.

“I hope this matter will be promptly investigated and that the results of the investigation are disclosed to the public. This cannot happen again.”