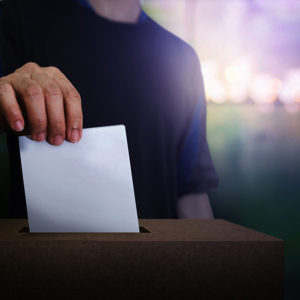 The Delaware County district attorney has created a task force in preparation for any disturbances that might arise at polling places on Election Day, distributing a five-page memorandum to county election officials, police officers, local constables and the county’s attorneys.

“In every instance in which the police are called to respond to a polling place, the DAO Election Taskforce should be notified,” the memo says.

Because the memo from DA Jack Stollsteimer’s office outlines security plans, Delaware Valley Journal is not publishing the document in full or disclosing all of its contents.

The memo goes into detail on how to handle issues around COVID-19, the taking videos or photographs including “ballot selfies” inside the polling place, the difference between permitted protests and intimidation, persons carrying firearms, and reports of dropbox workers behaving improperly.

First Assistant District Attorney Tanner Rouse says although the memo formalized the task force, the idea is not new. He says members of the DA’s office have been on stand-by in past elections.

One particular challenge is how to approach allegations that someone has dropped off more than one ballot in a dropbox location — something that would violate Pennsylvania’s ballot harvesting laws.

“There was one particular day here at the courthouse at the government center where a couple of different people were able to report, ‘Hey, I witnessed this [a person dropping off more than one ballot]’ and I personally spoke with county representatives, the bureau of elections to try to make sure someone would man that dropbox thereafter to discourage anyone from doing so,” Rouse told Delaware Valley Journal. “And that’s exactly what took place.”

“We are a little bit handcuffed in what we can do because once those ballots are in, they’re anonymous,” he added.

A similar controversy took place in Philadelphia, only the parties involved were the Trump campaign and Mayor Jim Kenney’s office.

The Trump campaign asked for an explanation to a photo appearing in the Inquirer that appeared to show Kenney ready to drop two ballots into a dropbox.

“The Mayor was also carrying a mail-in ballot belonging to a person with whom he is personally close,” Kenney’s spokesman Mike Dunn said. “The elections official standing with him in the photograph informed him that he was not allowed to deposit that person’s ballot. The Mayor then deposited only his own ballot into the drop box.”

The Trump campaign, which had been asking Philadelphia to personally staff each dropbox location, said the mayor’s response proved their point.

Prior to that, people had been taking pictures or video of people who looked like they were dropping off more than one ballot. Pennsylvania Attorney General Josh Shapiro quickly denounced that as possible voter intimidation.

“There are cameras stationed with those drop boxes. So, any and all concern about people dropping more than one ballot, the park police are monitoring 24-7, which just to say, there is no need for anyone to be videoing,” Rouse said. “I appreciate [it], and let’s interpret it with the best of intentions that there is no intent to intimidate, that [the intent] is just to be sure that everyone is mindful of the law. That’s great, but we got it. We’re on it. And we’ll take it from here. People should not be videoing people dropping ballots, people voting, etc.”

The Delaware County task force comes close on the heels of the announcement of a similar a task force created by Philadelphia District Attorney Larry Krasner, though his had a decidedly more pronounced political edge.

“President Trump repeatedly lies on national television about how elections are run in Philadelphia, because he knows that here in the Cradle of Liberty we will not stand for the continued degradation of our democracy,” District Attorney Krasner said.

“My office will work alongside the City Commissioners and our partners in law enforcement, government, and community to ensure that no Philadelphian is intimidated, misled, threatened, or harmed as they cast their ballot.”

Policing the election is a balancing act, however, as there is a “general prohibition against police officers being within 100 feet of a polling place,” with minor exceptions like when the police officer is voting, or if they are specifically called to quell a disturbance.

Elected constables are the only law enforcement persons identified by Pennsylvania law to provide election security directly at polling places.