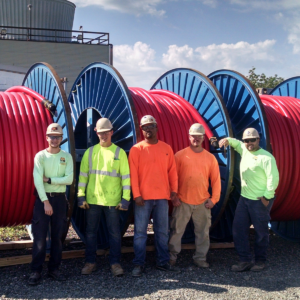 Delaware Valley’s construction industry got some good news from Gov. Tom Wolf Wednesday when he announced it will be reopening on May 1, a week before most other businesses in the state. But, they say, it may not be enough to make up for what they believe has been Wolf’s mishandling of their industry during the state’s coronavirus lockdown.

Chris Peirson is executive vice president and part owner at Tri-M Group, a construction firm with more than 500 employees headquarted in Chester County specializing in building automation and electric work. He says when he first heard the comments from Gov. Wolf on the May 1 reopening, he thought the governor misspoke.

Peirson told Delaware Valley Journal that Wolf’s decision will have an immediate impact on the area’s economy. “We can get maybe 50 percent of the people we’ve had to furlough back to work, which is huge when you’re talking about the impact to people’s lives,” he said.

Peirson added that they can’t be certain when his industry will get back to 100 percent employment because of potential concerns among the workers themselves and the rest of the community.

“We have jobs directly with end-users. So obviously part of this is, the end-users have to be willing to go back up for us to do work, which, not everyone may be willing to do that at this point.”

Joe Perpiglia is president of the Associated Builders and Contractors’ (ABC) eastern chapter in the state based in Montgomery County and which represents more than 500 companies with tens of thousands of union and nonunion construction workers. He, too, was completely surprised by Wolf’s calendar adjustment, but says the May 1 opening announcement is an incredible relief because rumors were circulating that a reopening might not happen until fall.

Perpiglia also believes continued pressure from legislation like House Bill 2400 likely played a role in Wolf moving up the timetable. HB 2400, sponsored by House Speaker Mike Turzi (R-Allegheny) would have allowed construction projects to resume as long as workers adhered to federal guidelines from the Centers for Disease Control — essentially overriding any narrower regulations from the state.

“What I did sense [from the governor] — and it was validated by a few of our legislative folks — I think he might be getting tired of vetoing stuff,” Perpiglia said.

The State House of Representatives House passed that bill Tuesday, which was nothing more than an industry-specific version of a broader bill Republicans had passed in both the House and Senate a week before, but which Wolf vetoed.

“That’s just my inference, but there was a little bit of fatigue,” Perpiglia added. “Because, you know, the bills were just going to keep on coming.”

Beyond internal pressure from Republicans, Wolf may have been feeling pressure from how neighboring states were regulating the industry. In one project in Delaware, Peirson says Tri-M would normally have seven workers on site, but with that state’s regulations, they only have one worker present.

“Delaware, for example, has remained open for construction,” Peirson said. “I believe Maryland has also. New Jersey just recently put a little more restrictions on construction. But to just shut it off like [Wolf] did, and the way that it came out — you know, eight o’clock on a Thursday night [March 16] — businesses had to close down the next day. It could have been handled a lot better I think.”

And it is the chaotic rollout that is generating the forward-looking concerns.

“Throughout this whole thing, [the Wolf administration] has been putting out things with very confusing information,” Peirson said. “There’s still a lot of confusion. The governor and the state can clarify if there are any requirements they’re looking for to open the sites.”

Perpiglia agrees and says much of the ongoing concern has to do with the Delaware Valley counties still being more of a “hot spot” than other parts of the state.

“I think there’s some outstanding anxiety that gets cleared up when they put out some more clear guidelines on how to reopen in preparation on May 1. I’m definitely anticipating that — edge-of-my-seat kind of thing.”

Both men agreed they expect nearly all industry players to try to exceed any continuing or newly issued safety regulations.

Wolf also courted controversy earlier this week when he said businesses should just pay people more if workers were reluctant to come back to work because unemployment benefits were more than their regular paycheck.

That theory was hotly debated in Washington when Congress passed the relief bill that added $600 per week to unemployment benefits, but Perpiglia says it is happening, and it could stall the recovery.

“I heard that concern this morning from one of our long-standing members who is in leadership at ABC. He said not only could it be a reality, it is reality for me today.”