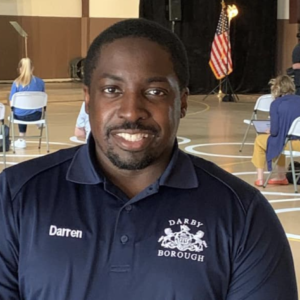 For at least 10 years, Darby Borough Councilman Darren Burrell has picked up and dropped off voting materials around Election Day. The problem is that some of those materials were completed ballots. With his name on them.

Burrell tells Delaware Valley Journal he meant no harm, he was just trying to help. Some judges of elections, who are normally the officials authorized to handle those materials, are either unable to drive or cannot drive at night.

“It’s unfortunate some judges of elections are not able to drive and they’re elderly,” said Burrell. “This is not abnormal.”

Burrell picked up some bags containing voting materials, although not the paper ballots which were delivered to polling locations separately, on the Monday before last week’s primary. Only one judge of elections came on Saturday to pick up the materials, which included items such as the voter rolls, said James Allen, director of election operations for the Delaware County Board of Elections.

Burrell, 39, beat former Mayor Paula Brown in a three-way race in the Democratic primary that also featured write-in candidate Joar Dahn. Brown questioned whether Burrell should have been permitted to handle the election materials since he was a candidate himself.

“It’s a major thing,” said Brown. Brown is also upset that Council President Jennifer Parks served as judge of elections for the 6th precinct, then left without turning in her ballots at the end of the election night.

While Brown does not claim she won the primary, she does question the handling of the election.

“The moral of the story here is the judges of election should have picked up the bags on Saturday,” said Brown. “They could have spent time over the weekend reviewing the video and book so they were ready on Tuesday morning. That did not happen. And a candidate should never be in possession of these materials at the beginning or the closing of the polls. Never.”

“It’s not ideal by any stretch,” said Allen, about how the primary election was handled in Darby.

For his part, Burrell labeled a reporter’s questioning him about what happened “a witch hunt.”

“It’s not fair to someone who does everything right,” said Burrell. “The machine tapes are tamper-proof. They are what they are.”

“I want to help the community. That’s it,” Burrell said.

Allen, who was only hired to oversee the county’s elections a few months ago, said there are safeguards to ensure the election integrity, noting the tapes are printed by the judges of election and there are scanned images of every ballot.

He called what Burrell did “a long-standing practice that we’ll address in November.”

On Monday, Rep. Bryan Cutler (R-Lancaster) introduced a bill to create a state Bureau of Election Audits under the state Auditor General. If passed, the new bureau would be required to conduct audits to confirm election results for each election in the state.

“Pennsylvanians rightly deserve and expect elections to be secure and accurate,” Cutler added. “An investment that ensures the public’s trust in our electoral process is worth every penny.”