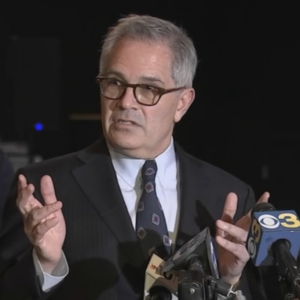 DA Krasner Shows He’s in ‘Another World,’ Claiming No Crime Crisis in Philly

Philadelphia District Attorney Larry Krasner said at a Monday press conference that the city is not in a crime crisis and people should not be fearful. The comments, which came days after Philadelphia broke its all-time murder record, have sparked heated condemnation, especially from prominent black Philadelphians.

Krasner noted that, according to police statistics, crimes falling into the “violent” category are down 3 percent compared to 2020 even while gun violence is up.

“It is actually striking that gun violence is so high,” Krasner said. “And yet, we don’t see violence as a general category that includes it going so high. We see it remaining at relatively normal levels, actually going down last year in many areas.”

However, after several days of negative press, Krasner sought to walk back his earlier comments and issued a statement Thursday, in part blaming the media for the kerfuffle.

“I know that some inarticulate things I said earlier this week have offended people,” said Krasner. “The message conveyed through media sound bites is not at all what I meant. Complete answers based on data aimed at solutions to gun violence will be edited down to sound bites. It’s my job to make sure even those sound bites are careful. As someone whose strong support is owed in part to the fact that I don’t communicate or make decisions like a career politician, it is my obligation to do better.”

A review of the police data does show rapes are down by 11 percent and assaults are down by 7 percent. FBI data reveals those drops to be the continuation of a years-long downward trend — rape has declined since 2013 and assault has head downward since 2018 after being flat since 2014.

Police data show, on the other hand, that murders are up 13 percent compared to this time last year, and robberies involving guns are up about 24 percent — both continuing notable spikes in recent years. Meanwhile, data from the DA’s office does not show a corresponding increase in prosecutions or convictions in either category.

In fact, the total number of cases in all categories dismissed or withdrawn by the DA’s office has spiked from 50 percent in 2015 to 73 percent this year, meaning nearly three out of four cases handled by Krasner’s office are not fully prosecuted.

Total gun robbery cases handled by the DA’s office have dropped 50 percent, from the 700s in 2015 to 2018 to a mere 366 this year. Of this total, the number of dismissed or withdrawn gun robbery cases has only dropped 19 percent compared to 2015. Meaning, while fewer cases are handled a higher percentage of those fewer cases end up not fully prosecuted.

Yet, Krasner has stood firm against mounting accusations that the city is letting criminals go free, including by one man who went on a 26-day hunger strike to protest what he sees as a government that has “given up.”

“We don’t have a crisis of lawlessness,” Krasner said.

But some people from the suburbs are reluctant to chance shopping, going out to eat or to the theater in the city nowadays. Montgomery County Commissioner Joe Gale and Republican candidate for governor, says the violence is keeping people from visiting the city.

“Philadelphia’s culture of violence is certainly deterring people from flowing into the city,” said Gale. “Suburban families and tourists have little interest in becoming a statistic.”

Gail Hardie Ford,  who lives in Upper Providence, told Delaware Valley Journal, “I worked in the city for years. Between violence and draconian Covid mandates, I no longer wish to visit.”

Lynn Brown, a Cheltenham resident, was planning to go shopping at the Christmas Village in Love Park this weekend but after hearing reports about increasing crime she is uncertain.

“I still haven’t made up my mind,” said Brown. “I want to but somebody else at work said something (about the crime). I’m still on the fence.”

“DA Larry Krasner is living in another world if he thinks that after a record 521 homicides this year, people should feel safe in Philadelphia,” said Jabari Jones, president of the West Philadelphia Corridor Collaborative, an association of businesses in West Philadelphia.

“Businesses in high crime neighborhoods typically shut down before nightfall, foregoing thousands of dollars in daily revenue because of crime. It also affects businesses being able to hire, especially those that rely on a younger workforce, because they have trouble convincing parents of young people that it’s safe to work there.”

“I have to wonder what kind of messed up world of White wokeness Krasner is living in to have so little regard for human lives lost, many of them Black and brown, while he advances his own national profile as a progressive district attorney.”

Krasner noted during the Monday press conference that his office is actively pursuing so-called “straw purchases” of guns to combat the rise of gun violence.

“It’s people who are able to buy guns legally purchasing those guns and then turning around and selling them to those who cannot buy them, to people who have felonies or who otherwise are not permitted,” he said.

This focus on guns seems to be supported by other city and state Democratic leaders.

Gov. Tom Wolf recently vetoed a bill that would have allowed citizens who want to legally carry a gun to do so without seeking government approval first.

“I support many public policy proposals that would help solve this urgent issue [gun violence], including safe storage legislation, extreme risk protection orders, enhanced reporting requirements for lost or stolen guns, and closing gaps in the background check system,” Wolf said in a news release on the veto.

On Nov. 24, the day the city hit 500 murders, Mayor Jim Kenney put much of the blame on the state General Assembly for not allowing the city to pass its own gun control legislation.

“There are people making money selling these guns, making these guns and the legislature, not the people behind me, don’t care,” Kenney said. “They don’t care how many people get killed.”

“While the Philadelphia Mayor and District Attorney claim the state has not provided the tools necessary to enforce firearm violations and illegal sales in the city, the opposite has been true and Act 58 of 2019 is a perfect example of the work we have done,” Gottesman said in an email announcing an effort by Rep. Martina White (R – Philadelphia) and Craig Williams (R- Delaware/Chester) to reauthorize that act.

“This move was necessary because it was clear that the District Attorney and Mayor of Philadelphia have no interest in prosecuting gun crimes,” said Gottesman.