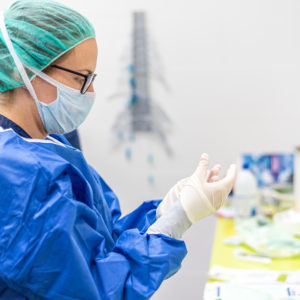 In the last seven days, there have been 34 deaths in Montgomery County linked to COVID-19 virus, county officials said Wednesday. That number marks a dramatic increase from the 14 deaths announced at a press conference last week and puts the county’s coronavirus death toll at 942.

The increase in COVID-19-related deaths comes as the county prepares to carry out full-scale testing on every worker and inmate at the Montgomery County Correctional Facility for the fourth time this year, in response to an increase in positive cases.

County Chairwoman Dr. Valerie Arkoosh (D) said the COVID-19 vaccines being distributed offer a “light at the end of the tunnel” but added people must still be prepared to “hunker down,” for the next two to three months, urging people to forego social events, avoid carpools, and work from home as much as possible.

Since the county’s update on the pandemic last Wednesday, it has counted 378 new cases, totaling 27,864. Those new cases were based on tests for the virus itself, not simply testing for antibodies.

Fifteen of those new cases are at the MCCF, but Arkoosh did not specify how many were correctional workers and how many were inmates.

“Vaccine will be arriving at eight of our nine Montgomery County hospitals this week, and at our ninth hospital next week,” Arkoosh said. Those vaccines will go to doctors and nurses dealing directly with COVID-19 patients. The last of those hospitals should have its doses by Monday if the deliveries go as planned.

From there, a priority list takes over in determining who can get the vaccine and when, but Arkoosh said she does not know if the county has the autonomy to move the MCCF up the list if the facility-wide testing showed a greater outbreak.

The county’s positivity rate — comparing the number of positive tests to the overall number of tests conducted — has remained above 11 percent for more than two weeks. Arkoosh said a five percent positivity rate is considered “containment” of the virus.

She also stressed that hospitals are urging people to stop coming to emergency rooms seeking COVID-19 tests, saying that the number of people who continue to do so is burdensome to the ERs.

Despite all the gloom, the chairwoman said cases and positivity rates appeared to be plateauing, but that shouldn’t be taken for granted.

Commissioner Ken Lawrence (D) announced the county will allocate an additional $5 million in county economic development funds directly for restaurants who have been hurt by the reduced business and government shutdown orders.

The application process for those grants will start two weeks from now on Dec. 30 and will close on January 6, 2021, and the grants will be doled out in $10,000 blocks.

Lawrence said the county has already distributed $20 million in CARES Act funding to restaurants in the area.

Even though Montco hospitals will begin vaccinating some of their front-line workers perhaps as soon as tomorrow, “none of our hospitals are getting enough vaccine with this first delivery to vaccinate all of their workers,” Arkoosh said.

“They are having to make priority lists even within each hospital,” Arkoosh said, adding that there was no certain date by which hospitals will be getting more vaccine, or even how many doses that might be.

The Wednesday update was also revealing in terms of the questions the county still has about the vaccine and its delivery.

Out of the estimated 97,500 doses of vaccine the state department of health will receive, Arkoosh said she had no idea as to the exact number that will be delivered to the county or its hospitals in the first batch.

“I suspect we’ll start to hear something within the next several days at least some indication of what we’ll be getting in our first delivery but — haven’t heard yet” from the state department of health, which will be making that decision.

Information about COVID-19 testing offered by the county begins at the 15:35 mark in the video below. All testing locations will be closed Thursday because of the snowstorm, but should be back open by Friday. Appointments are urged for everyone.