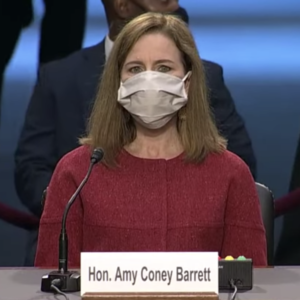 If Democrats pay a political price over the issue of court packing, they can’t say they weren’t warned.

Some prominent progressives are pushing Democrats to increase the size of the U.S. Supreme Court so they can add new judges and create a liberal majority, if their party wins control of both Congress and the White House. The issue has become part of the 2020 campaign, raising questions that Democratic nominee Joe Biden refuses to answer.

And it’s also become part of the confirmation hearing for Supreme Court nominee Judge Amy Coney Barrett. Nebraska Sen. Ben Sasse (R) told his fellow members of the Senate Judiciary Committee that packing the court “is a partisan suicide bombing that would end the deliberative structure of the United States Senate. It is not judicial reform.”

The court packing idea isn’t new. The last time it was attempted, things ended badly for the president who tried it.

When FDR won a second term in a then-record landslide in 1936, he decided to flex his political muscles. He dropped a bombshell by unveiling the Judicial Procedures Reform Bill of 1937. Roosevelt wanted to increase the number of justices on the court to a maximum of 15, presumably with New Deal-friendly appointees.

And it blew up in his face.

The Senate, though overwhelmingly Democratic, wasn’t interested in altering the Founding Fathers’ checks and balances. There was minimal public support, too. The Senate Judiciary Committee’s report was damning, calling the plan “…needless, futile, and utterly dangerous…” On July 20, senators voted 70-20 to return the bill to the committee, where its court packing provisions were stripped.

It was a spectacular blunder for one of the shrewdest politicians who ever occupied the Oval Office. Roosevelt may have been an inspiring leader; but he could also be personally petty and vindictive.

Following his humiliation, he decided to purge conservative Democrats who had opposed the court-packing plan. FDR fired the opening salvo in one of his trademark Fireside Chats in 1938, saying: “I feel that I have every right to speak out in those few instances where there may be a clear-cut issue between candidates for a Democratic nomination …”

In other words, the president sought retribution on fellow Democrats who had opposed him by supporting their primary election rivals.

He took his fight to their home turf, too, telling a Georgia crowd: “If I were able to vote [here], I most assuredly should cast my ballot for Lawrence Camp,” Sen. Walter George’s rival. He made a similar swipe in South Carolina against Ellison “Cotton Ed” Smith.

But his harshest (and most personal) attack was aimed at Maryland Sen. Millard Tydings: “He is one of those people in public life who quote the Golden Rule and take no steps to bring it closer.” Tame stuff today, but radioactive for a 1930s Democratic president talking about a fellow Democrat.

The final result: only one FDR-backed challenger won. The rest all went down in flames. It was a fiasco on top of a disaster for Franklin Roosevelt.

Sasse reminded Senate Democrats they’ll be playing with fire if they try packing the court next year. And history clearly shows those who play with fire get burned.