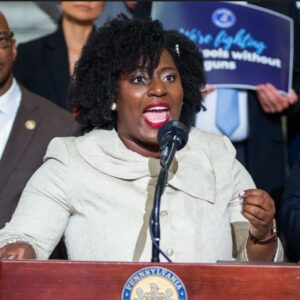 While it appears that Bucks County Republican Joseph Hogan has bested Democrat Mark Moffa for the 142nd state House district, the seat vacated by Frank Farry, who was just elected to the state Senate, the close contest might be headed to court.

And control of the state House remains up in the air.

Bucks County spokesman James O’Malley said, “In the normal course of ensuring the results of last week’s election are accurate and complete, Board of Elections staff discovered Friday that some in-person votes – including some ballots cast in a voting precinct within the 142nd Pennsylvania House District – were not included in the county’s reported unofficial election results.”

Bucks officials have also faced criticism for permitting ballots “harvested” from nursing homes to be included in the count.

While neither Hogan nor Moffa responded to requests for comment, a spokesman for the House Republicans said it was still too soon to call the race because the Bucks County Democrats want ballots without signatures and dates to be included so a judge will likely decide.

In neighboring Montgomery County, Democratic challenger Melissa Cerrato has edged ahead of longtime Republican state Rep. Todd Stephens by 37 votes, but more votes remain to be counted in this razor-thin contest.

Kelly Cofrancisco, a spokeswoman for Montgomery County, said, “Fifty-nine provisional ballots that are subject to the hearing scheduled for Friday.”

“The majority is 102 seats,” said Republican spokesman David Foster.  “If Stephens ultimately loses, but Hogan wins, we’re at 101 to 101 with the seat of the late Democratic Rep. DeLuca being the deciding vote.  But that election won’t happen until March at the earliest, May at the latest.  If Stephens and Hogan pull it out, we’re ahead 102-101.”

However, Democrats are not that shy.