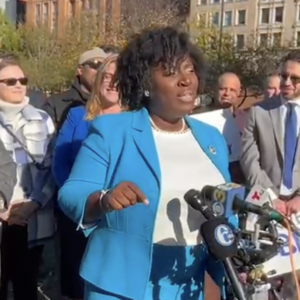 A day after dodging a predicted “Red Wave,” Pennsylvania Democrats laid claim to control of the state House.

At a Wednesday press conference, a group of House Democratic leaders said they had won a majority in the lower chamber, crediting ‘fair’ redistricting for the victories. The Democratic State Committee also elected Rep. Joanna McClinton (D-Philadelphia/Delaware) as the new House speaker.

“Fifty percent of Pennsylvania voters vote for Democrats,” she said.

Not so fast, said Liz Havey, the GOP chair for Montgomery County.

Not all races have been decided. And for the seat that was vacated by Rep. Tracy Pennycuick, who was elected to the 24th District for the Senate, Donna Scheuren was ahead by 3,000 votes. However, Rep. Todd Stephens (R-Horsham) was only leading Melissa Cerrato by 26 votes late Wednesday afternoon, Havey said.

But Pat Poprik, chair of the Bucks GOP,  agreed with Havey that the Democrats are jumping the gun.

“I  have not heard or seen the comments of the House Democrats, however, I believe they are speaking too soon.   Several districts throughout the state have not been finalized and I don’t think anyone can conclusively say who will hold the majority in the House,” said Poprik. “As of right now, the 142nd district is definitely not finalized.  Our candidate Joe Hogan is down by only 2 votes and there are many votes still not counted,  including the provisional votes from the polling places, some ballots from the drop boxes and the military and civilian overseas ballots.

“For anyone to claim victory in that race is quite premature . We feel very good about our candidate’s chances of winning the seat and we anticipate favorable final numbers from the Board of Elections in the very near future,” she said.

If Democrats are right — and some GOP sources tell DVJournal they believe it is true — McClinton would be Pennsylvania’s first woman Speaker.

“We’ll finally have a woman who has the gavel,” McClinton said.

McClinton, 40, graduated from Villanova University Law School and LaSalle University and grew up in Philadelphia. She became the first woman House Leader in 2020.

In Tuesday’s election, Democrats Josh Shapiro and John Fetterman won the races for governor and U.S. Senate. House Democrats will start in January to enact their agenda with Shapiro’s help, McClinton said.

“At a time when women’s rights were completely on the ballot, at a time when we are able to create an agenda to work with our governor, Josh Shapiro, and our Lt. Gov., Austin Davis, (it will be) an agenda that supports working families across the commonwealth. An agenda that supports families that were like mine, where there was just one parent doing their best for two children, struggling at different times, and making many sacrifices. But we bring that story of success to every household across the Commonwealth of Pennsylvania.”

At the press conference, Rep. Leann Krueger (D-Folsom), chair of the House Democratic Campaign Committee, said that it projects most of the remaining mail-in ballots being counted will break for the Democrats.

“We had a deep canvassing program,” she said. “We knocked on over 1 million doors.”

Christopher Nicholas, a Republican political consultant and Eagle Consulting principal, explained what happened when the state redistricted after the 2020 Census.

“The fifth so-called ‘independent member’ of the Redistricting Commission leaned hard into the Democrats’ social justice-oriented redraw of the state House maps and it decimated at least 10 GOP seats. So, before the elections took place, House Democrats had a baked-in gain of 10 seats and they needed a net gain of 12 to take control,” said Nicholas.

“I was pleased to be part of the successful effort to flip two blue House seats to red: the 9th in Western Pennsylvania and the 119th in Luzerne County. Marla Brown in HD-9 and Alex Ryncavage in the HD-119 will both be strong advocates for their constituents and assets to the House GOP caucus,” he said.

“The ‘Red Wave’ is barely a ripple in Pennsylvania and even less than a ripple in Chester County. With Republicans in the Pennsylvania House and Senate working to restrict a woman’s right to choose and limit access to the polls, having control of one chamber in addition to the offices of governor and lieutenant governor means those efforts can be stopped and provides the opportunity to create and pass meaningful legislation that will benefit all Pennsylvanians.”