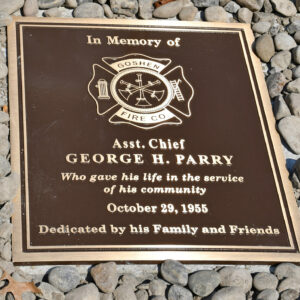 Fallen Goshen Fire Company Assistant Fire Chief George H. Parry’s three surviving children attended a ceremony Wednesday to honor their late father who died in the line of duty on Oct. 29, 1955, and to rededicate the plaques for 11 other heroic first responders.

A plaque honoring Parry was installed at the Memorial Garden at the Chester County Public Safety Training Campus in South Coatesville in a ceremony that included speeches, along with the mournful sound of bagpipes, and culminating in “Taps.”

Parry died when the firetruck that he was riding in rolled over on the old Route 29 railroad bridge as the fire company responded to a barn fire. 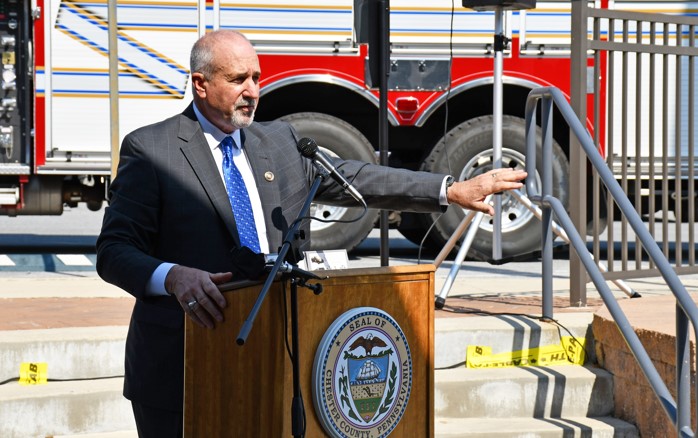 “It’s hard to be reminded of Oct. 29, 1955, said Parry’s son, Michael Parry, of Atglen. “Today made it worthwhile for everybody that wasn’t alive at that time, grandchildren, great-grandchildren. They can recognize and know who George Parry was.” His dad was very active in helping the community, said Michael Parry, who was only 13 months old at the time of the accident. His mom, who never remarried, didn’t talk about his dad’s death much. “I found out through newspapers when I was old enough to read.”

Daughter Mary Lee, who lives in Greenbelt, Md. said, “We feel less alone.” She was 11 years old when her father died. The plaque and ceremony were “a lovely gesture. He would have stood in the background. He never looked for any attention. He did an awful lot to help the community.” 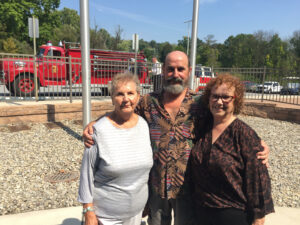 In her remarks, Board of Commissioners Chair Marian Moskowitz said Magisterial District Judge John Bailey, past president of the Chester County FOP Lodge 11 began the county’s Hero Plaque Program in 2009 on the county courthouse grounds in West Chester. But officials realized that location did not provide the “visibility and prominence they deserve” and was not secure. So the plaques were moved to their current location and rededicated with the new plaque for George Parry just unveiled.

“John, I thank you for your determination and efforts to bring this program to Chester County,” Commissioner Michelle Kichline said to Bailey, “…because it is right that we should never forget those who lost their lives protecting us.”

She also thanked James Binns, deputy chief of the Darby Township Police Department, who founded the Hero Plaque Program 20 years ago. More than 300 hero plaques have been dedicated in the Delaware Valley region since then, she said.

“Those who have made the ultimate sacrifice should never be forgotten,” Kichline said. “And in supporting their families, you honor them even more.”

Bailey said later, “It’s so important we continue to do this at the training facility. It’s the best location.  It’s something we want to keep going and, sad to say, we’ll have future plaques dedicated. I’m very, very thankful that we have this location.”