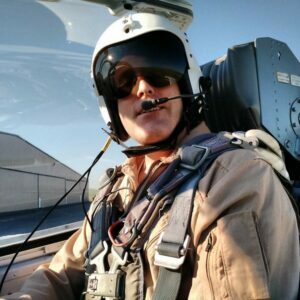 Can ‘Top Gun’ Training Give U.S., Taiwan Leverage to Keep China at Bay?

It was an image that got the Pentagon’s attention: Satellite photos of targets shaped like an American aircraft carrier and at least two Arleigh Burke-class destroyers on a Chinese military weapons range. The images were made public earlier this month by the U.S. Naval Institute.

“What we’re concerned about … is the increasing intimidation and coercive behavior of the Chinese military in the Indo-Pacific,” Defense Department press secretary John F. Kirby said in response. “We’re focused on developing the capabilities, the operational concepts, making sure we have the resources and the right strategy in place so that we can deal with [China] as the No. 1 pacing challenge.”

And one of those key capabilities, many military experts believe, is advanced and enhanced training for America’s warfighters.

In September, a series of military tests were conducted at the Naval Air Systems Command in Patuxent River, Maryland using an advanced training environment incorporating live, virtual, and constructive capabilities developed by Cubic Mission and Performance Solutions and its partners– the same company responsible for the training and tech that was seen in the movie “Top Gun.”

“This is really changing the way that we go about training,” says Paul “PK” Averna, a former Top Gun instructor now working for Cubic.

“For the live platforms, when you’re out on the range and you’re looking at your displays, all of the displays are correlating to the environment in which you’re fighting,” Averna said. “So, if I’m locking up somebody beyond visual range, I would expect to see certain indications across all of my displays, and you get that with this equipment – you can’t tell which targets are real, which are virtual, or which ones are constructives.” [sic]

And it’s not just flight training. On the ground, the U.S. Army is reportedly looking into creating a Synthetic Training Environment combining augmented and synthetic reality.

Advocates for this new generation of integrated, high-tech training argue that it’s more than just military bells and whistles, or advanced video gaming. They believe it can help tilt the advantage toward the U.S. and provide some of the leverage to keep China’s ambitions in check.

In the past, America could count on a large advantage in technology and firepower over its potential adversaries. Today, China is a “near-peer” adversary — and some defense experts in the U.S. say it’s time to drop the “near.”

“We should be quite concerned,” says Zack Cooper, Senior Fellow in U.S.-China Relations at American Enterprise Institute (AEI). “China has the world’s largest navy now, it has been engaged in a remarkable military modernization over decades and yes, the United States still has some very substantial military capabilities, but we’ve been fairly distracted.”

“Many analysts expect a conflict with China will be over quickly, and because of the nature of modern warfare there are reasons for that view,” says Gordon Chang, author of “The Coming Collapse of China.”

“Nonetheless, we should expect a long conflict, and we have to prepare for the worst,” Chang said.

After all, wars rarely turn out the way planners contemplate.

“China’s military tech is good,” Chang added, noting its July test of a hypersonic glide vehicle with nuclear capabilities. That test, it has now been learned, also included the unprecedented launch of a separate missile from that same vehicle. China’s level of technological advancement caught Pentagon officials completely by surprise, according to media reports.

Chang says the U.S. did not develop hypersonic glide vehicles in hopes of avoiding an arms race in that arena.

“Unfortunately, neither China nor Russia showed the same restraint,” says Chang. “We are behind in anti-satellite tech for the same reason: American leaders failed to understand their Chinese and Russian counterparts.”

All of which is more reason, advocates for “Live Virtual Constructive” or LVC Training argue, to invest in the advanced training of the men and women who would be on the frontlines of any fight. It’s an advantage that can’t be taken away, they say.

“The ability to rapidly upgrade existing range infrastructure and integrate live participants with a common synthetic environment is essential to provide the realism needed for the Night One scenario,” said Mike Knowles, president of Cubic Mission and Performance Solutions.

“It’s not enough to field a system that can only support one platform. It has to deliver the common training environment for the way we will fight – distributed, alongside Joint and Coalition partners, leveraging advantages in multiple domains with proficient warfighters.”

A demonstration of this training was held at the Pax River Naval Air Station in Maryland in September. Another is scheduled for January.

Still, says Brent Sadler of Heritage  “there is no substitute aggressor training, Top-Gun style, when you’re going against human operators for real.”

Sadler agrees that superior training plays a role in attempting to achieve military advantage against China and Russia.

“Yes, training matters. It always matters. And new technology makes it much more realistic — for submarines, surface ships, pilots — it can be helpful. But at the end of the day, there’s still the time you have to be in the seat. There has to be in the back of your brain, ‘I’m going to die if I get this wrong,’” Sadler said.

At the same time, Averna says, the Live Virtual Constructive training gives the warfighters another advantage.

“We all have perceptions of what’s going on in the middle of a high-intensity environment, but it’s really when we’re able to pull back and look objectively at relative positions of one another, and who did what to whom, that is where those kinds of systems really help,” Averna said.  Combined with the advantage of having Live participants operating their platforms as they would on Night One in an authentic training environment securely, where potential adversaries can’t observe how you are training, and you have introduced a new lever in the Combatant Commander’s available options against a potential threat.”

The U.S. military will likely need every advantage it can get to counter China’s ever-more aggressive stance toward Taiwan. The Chinese military set a new record in October for incursions into Taiwan’s air defense identification zone, with 196 sorties. The previous record was set in September with 117 sorties.

James Hutton, a former assistant secretary at the U.S. Department of Veterans Affairs and a retired colonel in the U.S. Army, says China views Taiwan as the crown jewel.

“Taiwan stands out as a democratically governed oasis, and for that China cannot let it continue,” says Hutton.

“Taiwan presents a particular challenge to the People’s Republic of China,” added Chang. “Although the citizens of the Republic of China–commonly known as ‘Taiwan’–do not generally consider themselves ‘Chinese,’ the citizens of the People’s Republic consider them as such, and the democracy on the island undermines the critical narrative of the Communist Party, that the Chinese people are not ready to govern themselves.”