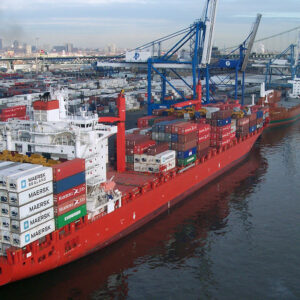 Can Container Ships and Kayaks Co-Exist in Philly’s Commercial Waterways?

Can container ships and kayakers coexist?

The short answer: Yes. But it won’t be cheap.

The Delaware Riverkeeper Network, along with Environment New Jersey, Penn Future, and Clean Air Council, argue they can. They have submitted a petition to the Delaware River Basin Commission (DRBC), saying the commission is legally obligated under the Clean Water Act to recognize the 27-mile stretch between Tacony-Palmyra and Commodore Barry Bridges as recreational waters.

Not so fast, says the Maritime Exchange for the Delaware River and Bay. That stretch includes quite a bit of commercial shipping. “We’re not trying to say that recreational water users shouldn’t use the Delaware River at all in those 27 miles, we’re just concerned about certain areas for navigational safety and maritime safety reasons,” said Lisa Himber, president of Maritime Exchange.

And now a battle is brewing over how to balance the needs of the region’s thriving shipping sector (and the many jobs it supports) and the interests of environmental groups like Delaware Riverkeeper Network.

“They think the river belongs to them, to the big ships and the port industry and to Maritime Exchange and not to the people and the natural resources that depend upon the river,” said Maya van Rossum, executive director of the nonprofit Delaware Riverkeeper Network.

The Maritime Exchange, the leading advocate for port and related businesses in the tri-state region, says it is doing nothing wrong by raising concerns about the petition and its goals.

“There is an effort underway to designate a stretch of the river that is not currently designated for primary recreation,” Himber said. And, he notes, it is not as simple as keeping container ships away from kids on their rubber rafts.

The petition wants the water in this stretch of river to meet “primary contact” standards. The Environmental Protection Agency (EPA) says primary contact recreation usually includes swimming, water-skiing, skin-diving, surfing, and other activities likely to result in the ingestion of water.

In the petition, van Rossum and others say the “entire Delaware River is recognized for this primary contact recreation.”  That means the commercial waterways would simultaneously have to meet the EPA’s health standard, an expensive prospect.

“The Clean Water Act actually obligates the DRBC, the states, and the federal government to recognize that this kind of recreation is happening, and as a result, they are legally obligated to ensure the quality of the water is high enough so that when people do come into contact with the water there is not the potential that they get sick.’”

Therein lies another problem. Philadelphia has old water systems that involve pipes carrying sewage and stormwater. Raw sewage has been known to pour into the river during heavy rain events.

Cleaning the river is possible, but it is not cheap. And while there are many places to recreate, there is only one place on the river Philadelphia goes to pay the bills.

Big ship traffic has been picking up thanks to a boom in fracked gas exports. Approximately 328 tankers sailed up the Delaware River last year and docked at Marcus Hook Terminal to take on liquified natural gas (LNG). According to Inquirer.com, only one vessel departed Delaware Bay carrying gas liquids in 2011.

“Someone who is not interested in using the river for recreational purposes probably doesn’t need to be interested,” says Himber. “Where it would become of interest is if the designation changes and there are increasing numbers of accidents on the river between commercial ship traffic and recreational users.”

“There are not accidents between the big ships and the kayakers or the canoers or the jet skiers,” responds Van Rossum. “It’s just not true.”

Maritime Exchange shared its concerns in a letter to the mayor and Philadelphia City Council members.

“They have indicated that they understand what we’re saying,” says Himber. “They do not necessarily agree with us.”

Councilmembers sent a response to Himber via Councilmember Mark Squilla’s office. They said the Council supports the co-existence of commercial shipping and on-water reaction.

“It’s analogous to saying there’s a lot of bad drivers on the road today, so we should have only commercial vehicles and not cyclists or pedestrians,” Masur told NJSpotlightNews.org.

Himber says his group did what it could. Provide information to decision makers. “We have done that and there’s nothing further for us to do at this point.”