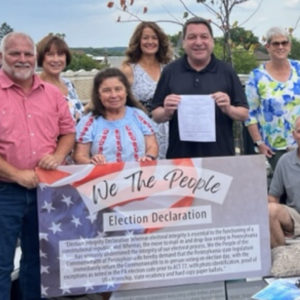 It has been asking politicians to sign a pledge that includes support for requiring voters’ photo identification, proof of citizenship, proof of residency, and ending no-excuse mail-in ballots, with only absentee ballots as provided in the law before Act 77. It also wants voters to use paper ballots.

At least five state senators, including Republican gubernatorial candidate Doug Mastriano, have signed so far according to Pennridge member Stephen Sinclair. Another 16 state representatives, along with county commissioners and sheriffs, have signed the declaration as well. And a growing number of candidates running for the State House are on board, too.

“One of our local state representatives, Craig Staats, who serves the 145th District (the north and northeast region of Bucks County) has committed to this effort,” Sinclair said.

Club president Kim Bedillion said, “Millions of Americans have lost confidence in the election process. State laws were amended without consent, outside money was used to boost vote counts in certain areas, poll watchers were not permitted access to watch the process, drop boxes went unmonitored, and the list goes on. It is important to our Republic that voters remain engaged in the election process. To that end, we must restore confidence in our elections.”

“Our club members are committed to restoring election integrity to Pennsylvania. Our election integrity committee is meeting with local election officials and law enforcement, petitioning legislators, and recruiting poll watchers. That is part of the DNA of our club. We don’t just complain about a problem. We roll up our sleeves and get to work on the solution,” she said.

Since Pennsylvania adopted Act 77, which permitted mail-in ballots and the state Supreme Court added drop boxes, residents have complained about an opaque process that might be a venue for voter fraud.

At a rally in Wilkes-Barre Saturday night, former President Donald Trump mentioned Act 77 and called on the state legislature to repeal it. He also urged voters to go out in person on Election Day, rather than mailing in their ballots or using drop boxes. Trump rallied in support of Mastriano and Dr. Mehmet Oz, the Republican running for the U.S. Senate.

Although a Commonwealth Court judge ruled Act 77 unconstitutional, the state Supreme Court, which has a 5-2 Democrat majority, overturned that decision.

The Pennridge Republican Club meets the second Wednesday of every month at 7 p.m. at Keelersville Club, 2522 Ridge Road in Perkasie.

On Sept. 14, Diane Haring will discuss how to submit Right-to-Know requests to school districts. Megan Brock, a mother who is fighting Bucks County for documents related to the county’s COVID policy and a possible cover-up, is also expected to talk to the group.