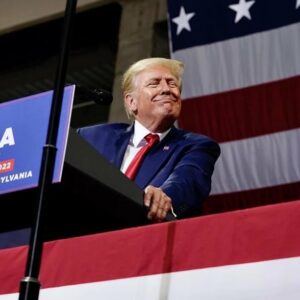 At his “Save America” rally in Wilkes-Barre Saturday, former President Donald Trump did not quite announce that he will run again in 2024. But he came close.

“I may just have to do it again,” he said of a future White House bid. He later added, “In 2024, we’re going to take back our magnificent White House.”

The crowd, which traveled from across Pennsylvania and the northeast to see Trump, cheered what they heard. The Delaware Valley Journal spoke to people from Connecticut, New York, New Jersey, and Rhode Island. Many sported clothing with Trump slogans or wore MAGA hats. And there was a party atmosphere as they waited for the former president to arrive, with music, dancing, singing, and chants.

“It’s great,” said Schuylkill Township resident Deborah Sulli, a Chester County Republican committeewoman about the rally that she attended with her mother, Lana Hill, of Paoli, “I support Trump and I support our candidates. I think it’s outrageous that Biden would say that over half the country is fascist.”

Hill, who is active in the pro-life movement said, “I love Trump. He should have been president (instead of Joe Biden). He really is our president; still should be. We’d never have this upside-down world if he was still president.”

In his remarks, Trump touched on inflation, illegal immigration, the border wall, taxes, regulations, national security, the Fentanyl epidemic, and the 2020 election. But he added a new element: the FBI raid on his home. 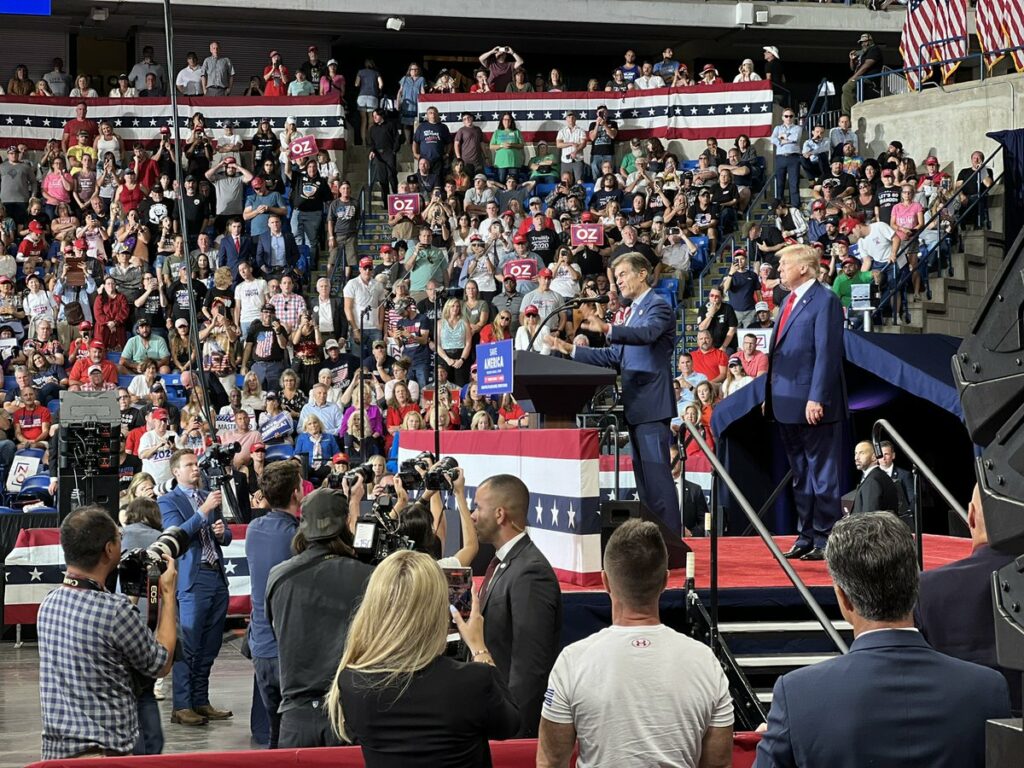 It is “weaponizing the Justice Department and the FBI like never before and breaking into the homes of their political opponents.

“Just a few weeks ago we witnessed one of the most shocking abuses of power by any administration in American history,” Trump said. “The shameful raid and break-in of my home in Mar-a-Lago is a travesty. They have made a mockery of America’s laws, traditions, and principles…Like a third-world country…the Biden administration invaded the home of their political opponent who is absolutely destroying them in the polls.”

Trump panned Biden’s Sept. 1 speech at Independence Hall, calling it “the most vicious, hateful and divisive speech ever delivered by an American president, vilifying 75 million citizens…as threats to democracy and as enemies of the state. You’re all enemies of the state.” 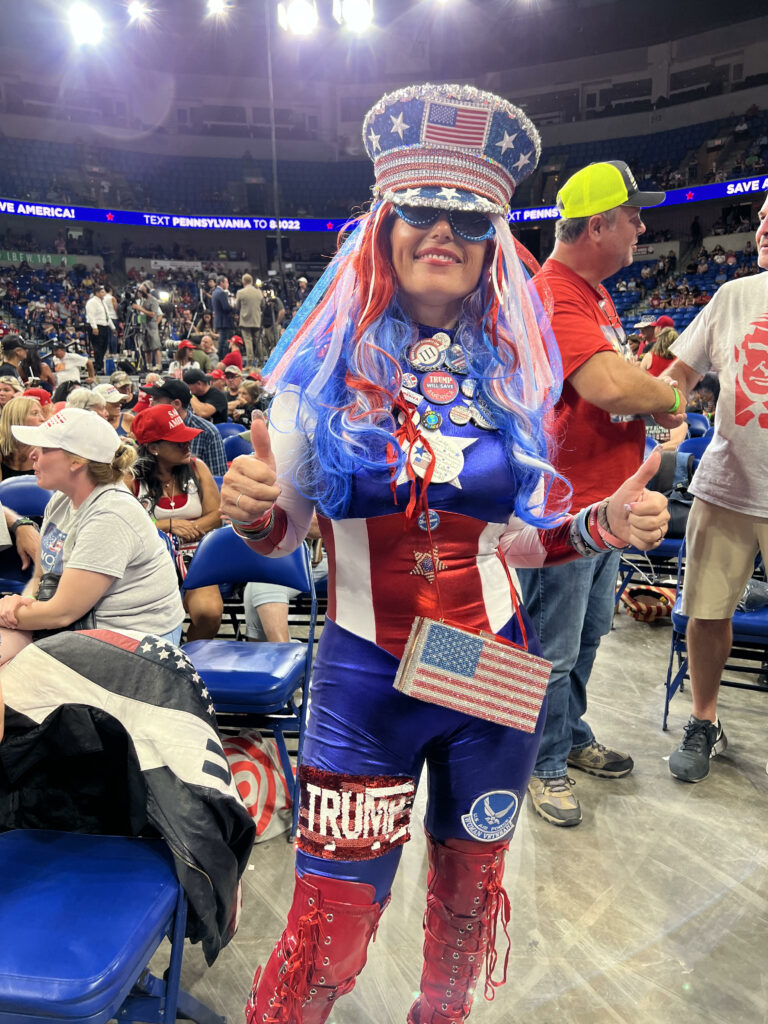 “I think Philadelphia was a great choice to make a speech of hatred and anger,” said Trump. “Otherwise the next morning he forgot what he said (referring to Biden walking back his attack on Trump supporters). How did you like the red lighting behind him, like the devil?”

“Last year Philadelphia set an all-time murder record with 560 homicides. And it’s on track to shatter that record again in 2022, numbers nobody has seen in other Democratic cities. Armed robberies are up 60 percent. Doug (Mastriano), you have to take care of that.”

Trump said the average drug dealer is responsible for 500 deaths throughout his lifetime and called for the death penalty for drug dealers.

Fetterman wears “a sweat suit…He’s dressed like a teenager hiding in his parents’ basement. But he’s for breaking hardened criminals out of jail in the middle of the worst crime wave in Pennsylvania history.  And by the way, he wants to get rid of your police. Fetterman is a defund the police Marxist who is just pulling the wool over people’s eyes.” 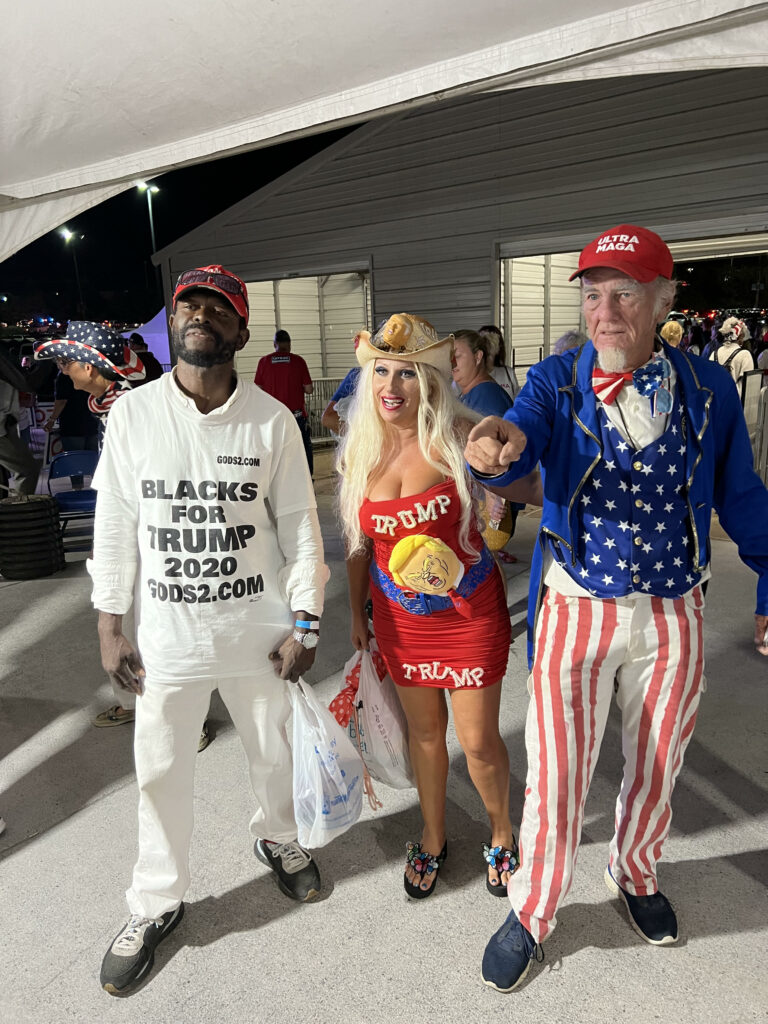 “Fetterman has released a record number of dangerous criminals out on the streets…Fetterman supports taxpayer-funded drug dens and the complete defunding of illegal drugs…which will mean death and despair to every community in Pennsylvania…And he signed a pledge to ban fracking which would demolish almost a million jobs in Pennsylvania…He’s a socialist loser who leached off his parents’ money until he was 49 years old,” said Trump.

When he took the stage, Oz had a question for the crowd. “Is the country headed in the right direction? If you’re afraid to say yes, take away their car keys they shouldn’t be driving…This country has dramatically turned in the wrong direction. I’m the person for change.”

“We’re going to fight like hell for voting integrity and I’m going to start with voter ID,” said Mastriano. “My opponent is too dangerous, too extreme, too radical for Pennsylvania. He can’t even define what a woman is.”

Trump’s take on Shapiro? “He is a disaster for the state…As attorney general, he presided over the complete disintegration of law and order and letting gangs and criminals run wild.”

Shapiro would “let criminals roam your streets and he’s not going to let you have a gun.” Shapiro supported school shutdowns and masks “to be strapped to your children’s faces.” And he called Shapiro a “pro-abortion extremist.”

“We need a landslide so big the radicalized left can’t rig it,” Trump said.

Local Republicans are hoping Trump’s visit will rally turnout among his supporters for the GOP ticket, which has consistently trailed Democrats in the polls. However, some recent polls show Mastriano and Oz trailing by just single digits as the election enters the post-Labor Day campaign stretch.