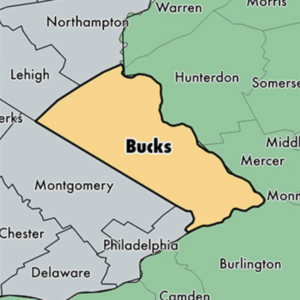 With the redistricting of Pennsylvania looming and the state set to lose a congressional seat due to lagging population, the Bucks County commissioners fired a shot across the legislature’s bow with a resolution to keep all of it in one congressional district.

“Bucks County has been a single congressional district for 170 years,” said Republican Commissioner Gene DiGirolamo. “I think that’s important to everyone who lives in Bucks County. There’s some chatter going on in Harrisburg, and I know our present congressman, Brian Fitzpatrick, has heard the chatter about possibly breaking Bucks County up into two separate congressional districts, and that is something I do not think anybody in Bucks County wants to see happen, whether you’re Democrat, Republican, or independent.”

“We want to keep Bucks County intact,” said Harvie. “We know there are other counties that are chopped up into pieces and it would certainly make the job of elected officials like ourselves more difficult and more complicated for the voters, not knowing who their congressperson is. We’re very fortunate. We want to make sure we keep it that way.”

Fitzpatrick said via email, “I strongly support the commissioners’ bipartisan resolution to keep Bucks County together in one congressional district. Democrats, Republicans, and independents agree. Bucks County is our home and our one community and splitting it into two separate congressional districts would clearly violate fair redistricting principles of keeping communities undivided and contiguous.”

State Rep. Frank Farry (R-Langhorne) agreed that communities should be kept together as political units and also favors keeping Bucks County as one congressional district.

Meanwhile, the average Pennsylvania congressional district has 753,058 residents. District 1, which encompasses Bucks County and a small portion of Montgomery County, has only 713,411 inhabitants, making it is short by 39,647 people or 5.3 percent.

Veteran GOP political consultant Christopher Nicholas with Eagle Consulting Group in Harrisburg grew up in Bucks County. The possibility of splitting the county into two congressional districts has come up before, he said. But in the last 50 years, the legislature has added a slice of Montgomery County or Philadelphia to the Bucks district to bring it up to the required population for a congressional district.

“If you’re the Democrats, you want to move that sliver further towards Philadelphia than where it is now,” said Nicholas. “And if Republican, you want to do the opposite. So Democrats for years have used the potential of cutting the county up as a cudgel.”

Gov. Tom Wolf had suggested splitting Bucks County into three congressional districts in 2018, said Nicholas. However, locally, keeping Bucks County as one congressional district has been “as much a Democratic Party priority as it has been for the Republicans,” he said. Meanwhile, Montgomery County is much larger with a greater population, so it has been split up and added to other districts, such as Berks, he said.

Asked why a portion of Lehigh or Northampton Counties that border Bucks County to the north have not been ad1ded, Nicholas said that area is considered its own region, the Lehigh Valley, rather than part of the Delaware Valley.

While Pennsylvania will go from 18 districts to 17, according to preliminary U.S. Census results, the western and northern parts of the state have lost population. In contrast, the central and southeastern regions have made slight gains.

Nicholas wrote an article in Catalyst Magazine using television markets to explain the state’s different areas and to explain why population trends favored the Democrats before the 2020 election since more people moved to areas controlled by Democrats than the more rural Republican parts of the state.

This year the release of the final Census numbers was delayed by the pandemic, slowing the legislature’s redistricting work, he noted.

“So I think you’ll see a plethora of maps coming out,” Nicholas said.