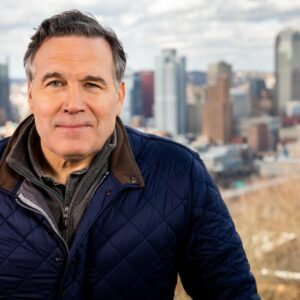 Republican Senate candidate David McCormick has filed a petition in Commonwealth Court to make sure that all undated ballots received were on time are counted in counties that are, so far, refusing to count them. It’s just the latest drama in a primary season featuring nonstop negative RINO ads and one of the Democratic candidates hospitalized shortly before Election Day.

A May 20 ruling by a federal appeals court that permitted mail-in ballots in Lehigh County to be counted despite not having the required date on the exterior of the ballot opened the door for McCormick’s petition.

McCormick, a hedge fund CEO, and celebrity Dr. Mehmet Oz are in a statistical tie in the Republican primary to be the party’s nominee to run against Lt. Gov. John Fetterman in the fall, and their contest is headed toward a recount.

“Both the Pennsylvania Supreme Court and the United States Court of Appeals for the Third Circuit have held that mail-in ballots should not be disqualified simply because the voters failed to handwrite a date on the exterior mailing envelope of their ballots,” said McCormick’s chief legal counsel Chuck Cooper. “Because all ballots are time-stamped by the County Boards of Elections on receipt, a voter’s handwritten date is meaningless. All timely ballots of qualified Republican voters should be counted.”

Jess Szymanski, a spokeswoman for the McCormick campaign, added, “Every Republican primary vote should be counted, including the votes of Pennsylvania’s active-duty military members who risk their lives to defend our constitutional right to vote. When every Republican vote is counted, Dave looks forward to uniting the party and defeating socialist John Fetterman in the fall.”

“The Board’s only basis for disenfranchising these voters is a technical error that is immaterial under both state and federal law. A plurality of the Pennsylvania Supreme Court has already held that the Commonwealth’s Election Code—which “must be liberally construed so as not to deprive . . . the voters of their right to elect a candidate of their choice”—”does not require boards of elections to disqualify mail-in or absentee ballots submitted by qualified electors who signed the declaration on their ballot’s outer envelope but did not handwrite . . . [the] date, where no fraud or irregularity has been alleged,” the suit said.

“By refusing to count absentee and mail-in ballots based solely on the lack of a handwritten date in the declaration section of the exterior mailing envelope, the Boards are depriving likely thousands of voters of the right to vote that (the law) explicitly preserved,” the suit stated. “These ballots were indisputably returned on time. Whether or not a voter remembered to write a date on the mailing envelope is entirely immaterial to whether that voter’ “is qualified under State law to vote’… Just as there is no basis on this record [for the Boards] to refuse to count undated ballots.” 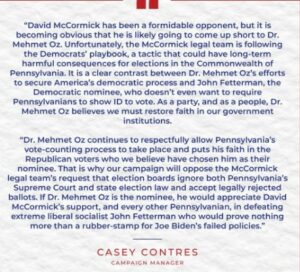 Meanwhile, Casey Contres, Oz’s campaign manager, responded with a tweet, saying that while McCormick had a been a “formidable opponent,” he was going to come up short and was “following the Democrats’ playbook” by filing the suit, which “could have long-term harmful consequences” to elections in Pennsylvania.

But if Oz is the nominee, he would “appreciate” McCormick’s support in defeating “extreme liberal socialist” Fetterman.

In addition to the counties, Pennsylvania Secretary of State Leigh Chapman, who oversees elections, was also named a defendant in the suit.