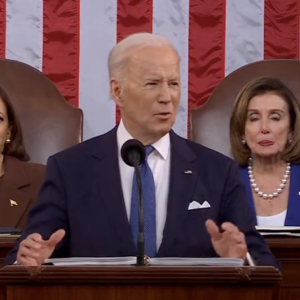 Despite polls showing Americans believe the state of the union is dismal, a defiant President Biden insisted his first year has been a success, reaffirming his support for trillions in new federal spending and aggressive green energy policies.

It was a State of the Union speech that’s unlikely to give aid and comfort to Pennsylvania Democrats facing a tough midterm election in November, or turn around Biden’s plunging polls.

After beginning with a tribute to the bravery of the Ukrainians in the face of the Russian onslaught, Biden launched a defense of his presidency and the spending proposals from the Build Back Better plan. That included hundreds of billions of dollars for green energy proposals, plus more taxpayer funding for childcare, healthcare and other social spending.

Veteran pol and Barack Obama advisor David Axelrod noted on Twitter, “Hard to avoid making a SOTU speech sound like a laundry list. The Tide did not turn tonight.”

More significant for Biden’s fellow Democrats, he didn’t turn the tide on messaging regarding inflation. While polls show soaring costs are by far the top concern of voters, Biden only mentioned it a handful of times. It wasn’t a key part of his speech, and he didn’t offer any proposals to end it. Instead, he said the government should spend more money helping Americans offset higher prices.

“I have a better plan to fight inflation, lower your costs, not your wages,” Biden said. “Economists call it ‘increasing the productive capacity of our economy.’ I call it building a better America.”

“President Biden began his speech tonight with a good message about Ukraine. I hope that his actions match his rhetoric and he will impose the comprehensive sanctions against Russia that I, and my Republican colleagues, have urged,” said Sen. Pat Toomey (R). “The president then went on to rehash a mostly partisan, liberal wish list, including the tax-and-spend agenda that recently failed in Congress.

“Tonight was an opportunity for the president to turn a new page towards the unity he promised our country when he first took office, but unfortunately, Americans got more of the same,” Toomey added.

“Biden gave a meandering, uninspiring speech. He had an opportunity to give a speech to reset what the majority of voters believe is an unsuccessful presidency but he chose not to do that,” said Montco GOP chair Elizabeth Preate Havey. “This speech won’t change anything for President Biden or for Americans.”

Several conservative and business groups noted how little Biden had to offer when it came to inflation and rising prices.

“If President Biden wanted to lower the costs of everyday expenses, he would fast track all domestic energy production and permitting needed for upgrades to the pipelines needed to move hydrocarbons from their extraction point to market,” said Leo Knepper of Citizens Alliance of Pennsylvania.

“Brilliant speech that exceeded expectations,” said veteran Democratic strategist Bob Shrum, director of the Center for the Political Future at the University of Southern California. “He addressed Ukraine, inflation, COVID. He could not have done better.”

“During times of tremendous hardship for the people of this nation and the people of Ukraine, President Biden is working to bring us together to fight for fairness and progress,” said Colleen Guiney, chair of the Delaware County Democratic Committee.

Rather than addressing the money supply or the impact of federal spending on an overheated economy, Biden blamed higher prices on greedy corporations “exploiting” markets and “driving up prices” and “announcing a crackdown on these companies overcharging American businesses and consumers.”

It’s not an argument most economists take seriously. As the left-leaning Washington Post editorialized:

“Economists across the political spectrum are rightly calling out the White House for this foolishness. Even some within the White House are questioning this approach, The Post reports.”

Biden also doubled down on green energy technology like wind and solar without any mention of expanding U.S. production of oil or natural gas. This is a blow to states like Pennsylvania that disproportionately rely on heating oil.

As Biden repeatedly declared his support for “Buy American” policies, Sen. Rand Paul (R-Ky.) tweeted: “You know who would like to Buy American right now? Europeans who need oil and gas and want to isolate Russia. But POTUS and climate extremists made sure they can’t do that.”

“My listeners want to know why there was no talk of the devastating effects of crime, but a lot on the need to further reform the police,” Giordano told Delaware Valley Journal after the speech. “They also feel the president’s Unity Agenda item of beating the opiate epidemic would be helped simply by securing the border.”