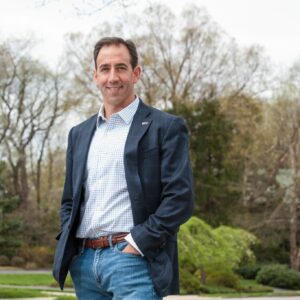 U.S. Senate candidate Jeff Bartos is trying to thread a political needle. The Montgomery County Republican who grew up in Reading must appeal to more moderate suburban GOP voters while burnishing his conservative credentials with Trump-loving voters in rural Pennsylvania.

“My rural roots, my Berks County roots, inform everything that is my conservative philosophy and also who I am as a candidate, who I’ll be as a senator,” Bartos told the Delaware Valley Journal. “But, of course, that’s overlaid (with) the benefit of knowing so many great people in the southeastern part of the state.

“I think it really is an unbeatable combination as we look not only at winning the primary but then going on to win the general election.”

Bartos, 48, a real estate developer who ran for lieutenant governor in 2018, is in the midst of a 12 day, 67 county campaign tour of the state. He’s running in a very crowded field to win the seat of retiring GOP Sen. Pat Toomey. Among the declared candidates in the Republican primary are political commentator Kathy Barnette, Fox News favorite Sean Parnell, former ambassador to Denmark Carla Sands, and 2019 Montgomery County Commission candidate Sean Gale.

“These are serious times that require a serious person with a proven track record of getting things done for the people of Pennsylvania,” said Bartos. “Over the last 14 months, I did just that. I rolled up my sleeves at the beginning of the pandemic, founded a nonprofit (PA 30-Day Fund) that was dedicated 100 percent to helping struggling small businesses get through the pandemic, get through the shutdowns and live to see a brighter day… It’s helped 1,057 women and men keep the lights on in their small businesses and saving thousands and thousands of jobs for working families.”

Bartos likes to talk about three things on the campaign trail: Saving main street businesses, “beating China in this existential race that we’re engaged in with the Communist Party in China to see who will lead the world for the balance of the 21st century,” and “restoring the American dream for our children and grandchildren.”

Taking a page out of former President Ronald Reagan’s playbook, Bartos said, “I am running an optimistic, hopeful, thoughtful campaign that is looking to bring in voters from across the commonwealth.”

Bartos praised Trump’s policies that held China accountable and spread “peace through the Middle East, (with) four peace deals between Israel and her Gulf neighbors within, I think, 45 days. It’s double the number of peace deals that had happened in the prior 40 years with all the geniuses we had down in Foggy Bottom (the State Department).”

Domestically, “we had the greatest economy in our lifetime,” Bartos said. “And before the pandemic, we were hitting on all cylinders, lowest black unemployment, lowest Hispanic unemployment…I’d be honored to have the former president’s support in this campaign. But our focus is looking forward, bringing a broad coalition of working families, small business owners, and Pennsylvanians who really want to lift up our Commonwealth.”

Bartos pushed back on this narrative, calling the reporting on this topic “atrocious and misleading.” He raised just under $1.2 million in the first quarter and had $1.1 million cash on hand. A super PAC that supports him is also raising money separately. Also, Fetterman and the Democrats are “burning cash at a much higher rate than we are. I’m running this campaign like a Republican. They’re running it like Democrats and we’re spending judiciously and we’ll have all the resources we need to win this.”

“I saw that The Hill newspaper reported that John Fetterman has 250,000 contributors. That’s quite a number,” said Robin Kolodny, a professor who chairs the political science department at Temple University. “Fetterman only has to seriously worry about (Montgomery County Commissioners Chair) Val Arkoosh. But Bartos has lots of other competition.”

Asked about what he does when not working or campaigning, Bartos said he’s a “proud husband” to Cheryl and “proud dad’ of Emily, 21, and Sarah, 19.