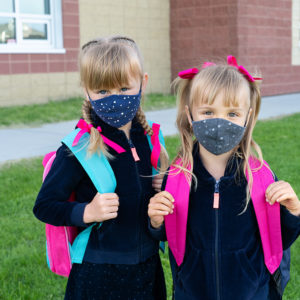 The start of the school year in Bucks County is less than 50 days away, and parents still don’t know if their children will be in class — or in front of a computer — this fall.

For Delaware Valley parents, that doesn’t leave much time to develop contingency plans to bail from the public schools if their unhappy with their school’s strategy for educating their kids.

National stories have helped fuel the uncertainty: In California, two of the state’s largest districts won’t open in the fall. And in New York, the president of a national teacher’s union said just last week, “There’s no way that you’re going to have full-time schools for all the kids and all the teachers the way we used to have it.”

Of Pennsylvania’s more than 700 school districts, charter schools and regional intermediate units, about 100 have submitted fall plans to the Pennsylvania Department of Education,” the Philadelphia Inquirer reported Wednesday.

Other polls from earlier in the crisis indicated many teachers were unwilling to return to work.

If this were a math class, put all of these data points into a formula — and the output equals anxiety for parents.

Schools face two challenges: Can they keep students safe from the spread of COVID-19, and will enough teachers return for classrooms to reopen?

“My 12-year-old happens to be an asthmatic, and it is quite difficult for him to wear a mask for an extended period of time. I do believe it is also for his protection, but lengthy amount of time would affect him,” Kelly Wade, mother of a Bucks County student, told Delaware Valley Journal.

But then Wade, a nurse who sometimes wears one for 12 hours a day, added: “I really do feel that if he and his classmates were in a school where masks were required, if they were able to do a decent amount of social distancing, I really would be OK with sending him.”

Masks? No masks? Social distancing — is it a realistic expectation for kids and teenagers in a school setting? Parents are struggling to reconcile these issues.

April Hynes said she’s comforted that her ninth grader, also in a Bucks district, might be in the “sweet spot” of complying with the numerous health rules.

“Compliance wouldn’t be very easy for elementary school children, it’s hard enough for them to sit still let alone follow all of these new rules with social distancing, masks, and hand washing.” And high schoolers — Hynes is a mother to a recent graduate — can fall into the youthful trap of “the invincible mentality.”

Still, the worries about hygiene seem to be dwarfed by concerns about the quality of education.

“My child is in a resource-room class for math, so it’s a much smaller class and he does require a lot of one-to-one help. And I do feel that most of that was lost the last nine weeks that they were not in school,” Wade said. “It had a huge impact on his learning.”

“So I am fearful that some teachers won’t come back and that he won’t receive the same quality — not only that he deserves, but that we moved into this district for.”

Wade summarized the attempts at tele-instruction as “a complete bust,” and the data back her up.

Analysis from an Oregon-based education assessment organization found that students nationwide will return to school in the fall with roughly 70 percent of learning gains in reading relative to a typical school year, and less than 50 percent in math.

A similar survey in Los Angeles showed on any given day, 32 percent of high school students weren’t logging in to learn.

“I wasn’t very impressed with the last semester,” Hynes said. “And I just kind of gave everybody grace because no one’s been in this situation before. But it seemed like other schools, my friends’ children in other schools, were in better shape than I felt like we were.”

Cyber-charters saw exploding enrollment in March and April. Local homeschool experts in the Delaware Valley say they’re seeing more interest in homeschooling than ever before.

“I know a family that their child has been in an online, you know, actual online school and they’ve had a fabulous education,” Wade said. “But I really think that depends on the type of kid that you have. Some children will thrive with being to do everything online, other kids really need that interaction. And that happens to be my kid.”

“So I just don’t think that would really work for him,” she concluded.

“The last I read, kids may have a choice to come back depending on their circumstance — maybe their parents have underlying health conditions, or they have health conditions or asthma — I would be a much more concerned parent,” Hynes said.

“But with all of us being relatively healthy, I’m not as concerned. But I’m concerned about the level and quality of her education, especially going into her high school where her grades are really going to matter and she’s going to build a foundation for college. But I’m worried about the quality of education.”