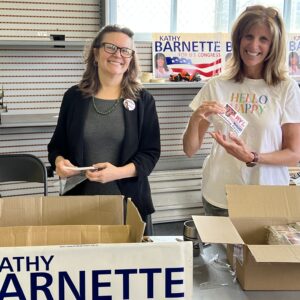 At Campaign HQ, Volunteers Stand By Barnette Amid Barrage of Attacks

Now that Huntingdon Valley resident Kathy Barnette is in a three-way statistical tie with Dr. Mehmet Oz and Dave McCormick in the GOP U.S. Senate primary, she is facing stiff criticism over her background, some social media posts, and doubts about her military career.

The feisty Barnette, who wrote a memoir about growing up poor in Alabama as the result of her mother being raped at age 11, is fighting back. And her DelVal volunteers have her back.

Glenside resident Ed Boyd said he has supported Barnette since “the first time I saw her speak.” He volunteered for Barnette when she ran for Congress in 2020 against Rep. Madeleine Dean (D-Montgomery County) and is still a strong supporter.

“She brings a message the Republican Party needs to hear,” said Boyd. “Her life story is inspirational. She’s a solid conservative. She’s not somebody trying to buy the nomination. She spent a fraction of the money the two big-money guys (Oz and McCormick) did.”

“It’s a grassroots kind of thing,” said Boyd. “She had to have a ground game strategy. A lot of America First people like her. She’s not a RINO (Republican in Name Only).” 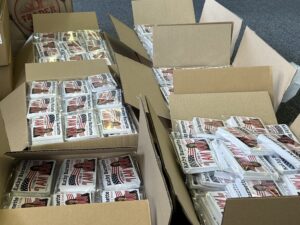 Boxes of Kathy Barnette palms cards to hand out to voters at the polls.

Asked about criticism over anti-Muslim tweets some consider hate speech and issues surrounding her military record, Boyd said the negativity was due to Barnette’s success. Barnette has since tweeted pictures of her military discharge papers.

Other reports say Barnette made disparaging remarks about homosexuals and transgender people.

“Whenever you’re going with somebody looking to rock the boat, you’re going to get that,” he said. “That guy (McCormick) is a hedge fund manager. The other guy (Oz) is an entertainer who was saying very different stuff a couple of years ago. He talks a good game.”

“We’re not just fighting Democrats,” Boyd said. “We’re taking shots from both sides.” Barnette is “not one of them. As she says, she is one of us.”

“You can’t buy a grassroots effort,” Boyd added. “You can only earn it.”

Oz has spent some $11 million and he has former Trump’s endorsement, while McCormick spent a similar amount. Their commercials have dominated Philadelphia television for months. Barnette, meanwhile, spent only about $1.6 million. Although in the last few days the Club for Growth has given her campaign an infusion of cash. 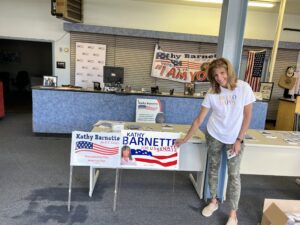 Kristin Baile of Plymouth Meeting was volunteering at Barnette’s campaign headquarters, filling boxes with Barnette palm cards to be shipped all over the state to hand out to undecided voters at polling places.

“I think she’s winning,” said Baile. “I don’t know who is putting out the attack ads, who is cutting and pasting attack ads. But I think the message is clear: she’s winning.”

Baile supports Barnette “because I know Kathy Barnette,” she said. “She’s not a politician. She is authentic. She is the same yesterday, today, and tomorrow. I tell her she is truth wrapped in charm. She is a genuine person.”

Bryn Athyn resident Cheryl Wille was also working at Barnette headquarters. She said she supports Barnette because she is “passionate. She is a true conservative, and you can see that she is very sincere and honest. She has integrity. She stands for my values.”

As for the attacks, Wille said, “Politics gets dirty, doesn’t it? I believe Kathy’s story. You know it to be true when she speaks it.”

“It’s just terrible that they make up stories at this point in the campaign,” said Wille.  Wille said she had no idea who was trashing Barnette.

As for Barnette versus her well-funded competitors, “It’s an absolute David versus Goliath story,” said Baile.

Philadelphia residents Carmella Maribella and her husband, Charles, came in with a box of palm cards packed and ready to go.

Barnette is “living the American dream,” said Maribella. “I watched the debates. I loved what she said. I’m pro-life, and of them all, I believe she has the most integrity. I can’t stand what they’re doing to her right now.”

Baile interjected, “She’s going to fight for us.”

Charles Maribella said Barnette is anti-establishment and “she’s not afraid to call them out.”

Carmella Maribella said video of Barnette that appears to show her praising Black Lives Matter was “chopped and edited.”

When that was done to former President Trump, “it was the left.” Now it’s “other Republicans,” said Charles Maribella.

“It’s not about politics,” said Baile. “It’s about Kathy. She gives us a voice.”

Wille said a message purportedly from Trump saying Barnette would not be able to win the general election is wrong.

“I don’t believe it,” she said. “I believe Kathy is the best candidate to beat (Lt. Gov. John) Fetterman (the presumed Democratic nominee) in the fall … She had Democrats changing their party to vote for her.”

Meanwhile, Barnette’s campaign manager Bob Gillie said, “The main thing is, all the mud that’s going on is not fully in context.  Kathy knows this mud is being slung. It just shows we’re over the target. Kathy is running a positive campaign. No matter what mud is slung we’re pressing forward.”