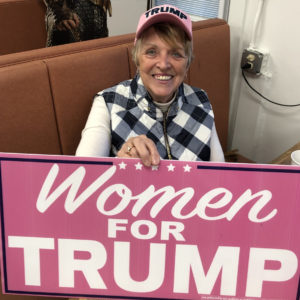 As Trump Struggles in Suburbs, Some DV Women Stand By Their Man

As the race for president approaches the finish line, both campaigns are making their closing arguments — and the Trump campaign is still working hard to win the votes of white suburban women in Pennsylvania.

At a campaign rally in Chester County on Tuesday, first lady Melania Trump highlighted her husband’s message to women voters.

The first lady’s appearance in Chester County comes on the heels of a Trump rally earlier this month outside Pittsburgh, in which the president made a desperate plea to women who, polls show, are leaning towards Biden.

“Suburban women, will you please like me?” the president said at the event. “Please. I saved your damn neighborhood, okay?”

The gap between Biden and Trump is still narrow in Pennsylvania, but polls this week indicate that the former vice president’s advantage is widening. A Reuters/Ipsos poll from earlier this week shows Biden ahead, 50 percent to Trump’s 45 percent. And a key element of Biden’s polling success is support from white, suburban women.

This year, according to recent Quinnipiac polls, only 37 percent of white women in Pennsylvania support Trump. That’s a far cry from 2016, when Trump won the demographic by a margin of 3 percent against Hillary Clinton.

However, for some women voters still loyal to the president, their support for Trump has only grown. According to Rebecca Belmont, a local Republican voter who led a “Ladies for Trump” demonstration at a Biden rally in Bucks County last weekend, Trump has followed through on his promises. About 150 women participated in the pro-Trump road rally, Belmont said.

“I voted for [Trump] last time. I didn’t tell anyone; I was one of the silent voters. I just thought we needed a change. I was sick of the corruption, the same-old same-old. We were not doing well during the Obama years. I have a business, and at the end of his second term, we were considering selling,” Belmont said. “The past four years, we’ve done so well. Our taxes were better, our insurance rates were better, the loan rates got better. We’ve been thriving under Trump.”

Kyrie Copas of Bensalem is also on board. “I support Trump because he does what he says he’s going to do in spite of the constant criticism,” she told DVJournal. “He’s not controlled or can be bought by big-time donors, I love that he’s not a career politician playing the games. I don’t worry about Trump selling us out.”

Belmont suspects that character may be the issued driving some white, suburban women away from Trump. “When I get into a debate with someone who supports Biden, it’s always about character, not policy,” Belmont said. “People have taken to heart that he’s a racist, that he doesn’t support LGBT — I don’t believe that.”

“I’m amazed that people are still talking about ‘his mouth,’ I’m looking at his actions. He’s a leader. I would also tell women to look at Joe Biden, how he’s been hiding out. Is that good?”

Cullen says some women have expressed concerns about Trump’s handling of COVID-19. “I’d rather have Trump’s balanced approach of protecting people but also getting back to our lives over the lock everything down and hide approach,” Cullen said. “I think most moms would agree.”

One campaign theme Team Trump is hoping will bring some of these voters back is public safety, an issue brought to the forefront of Pennsylvania politics just days before the election.

After police fatally shot Walter Wallace Jr, a mentally ill, knife-wielding Black man, in West Philadelphia on Monday, protests erupted in the city once again. At least 3o Philadelphia police officers were injured, and more than 70 people were arrested on charges including looting, rioting and assaulting officers.

Gov. Wolf has mobilized the National Guard to Philadelphia, but some local residents complained that he offered little support for the wounded cops or looted businesses. This appearance of a “soft-on-rioting” political view could be politically potent among suburban women, Trump backers say.

“Philly had riots last night,” Belmont said. “I think what reaches suburban women is security. The unrest is really scary when you have a family and young kids. Some of the protests were less than seven miles from where we live.”

Of Melania Trump’s outreach to white suburban women on Tuesday, Belmont said, “I was going to go to that rally. I think the timing of the statement was brilliant, after filling the [Supreme Court] seat with judge Amy [Coney Barrett]. Mothers of my generation didn’t work, we were always told you couldn’t do both.

“The reason I never had children is I didn’t want to compromise, now you can do anything you want. Trump has elevated some powerful women that have family units.”

Greyson Van Arsdale is a freelance writer in the Philadelphia area. He wrote this for Delaware Valley Journal.