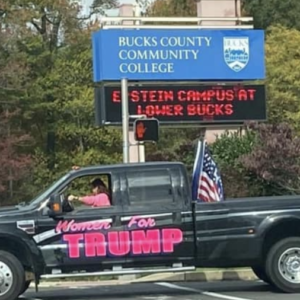 Joe Biden told a Bucks County rally Saturday that, if elected, he would be a bipartisan president for all Americans, but he may have undermined his message by calling nearby Trump supporters “chumps.”

Biden made the remarks during a socially distanced drive-in rally at Bucks County Community College in Bristol Township.

“I’m running as a proud Democrat, but I will govern as an American president, and I will work as hard for those who don’t support me as for those who do,” Biden said, “including those chumps with a microphone out there.” Biden was referring to a group of several hundred Trump supporters in a nearby parking lot who were shouting and honking their car horns.

“We don’t do things like those chumps out there with the microphones, those Trump guys,” Biden added.

“I’m offended by the ‘guys’ part,” Rebecca Belmont told Delaware Valley Journal. Her group, “The Ladies of Bucks” organized the Saturday car rally that eventually rolled into that parking lot in Bristol.

“We planned a car rally Saturday from the Trump store in Bensalem, past Woodhaven and around the interstate because we wanted to drive by the billboard we have up on I-95. When we got back to the Trump store, we were still pretty wired. One of my girlfriends said ‘You know, there’s a Biden rally one exit up — let’s go check it out!’ So we did.”

Belmont said she and her fellow Trump supporters were enthusiastic but not rude. (“We were yelling ‘four more years!’ and they were yelling things back I can’t quote.”) As for the “chump” comment, they didn’t hear Biden say it and didn’t find out about it until later in the day. 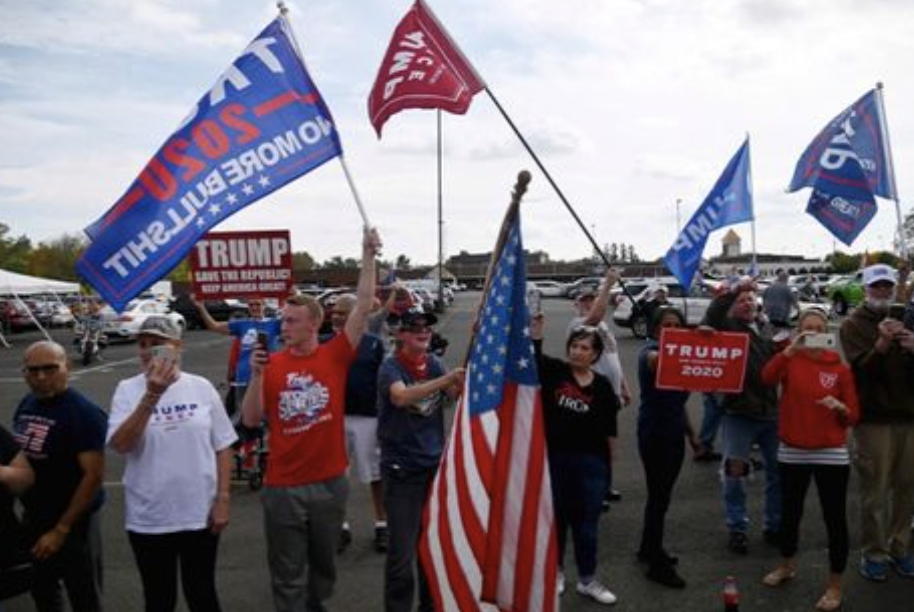 “It’s upsetting. A chump is someone who’s stupid. I don’t want a president who thinks we’re stupid,” Belmont said.

“Joe Biden should apologize for insulting millions of Pennsylvanians who support [President] Donald Trump. I’m proud to be one of those ‘chumps’ (deplorables?).”

Jim Worthington, a Buck County activist and 2016 delegate to the Republican National Convention told DVJournal he also made the “chumps/deplorables” connection when he heard Biden’s comment.

“Joe Biden made the same mistake Hilary Clinton did, calling us ‘deplorables.’ He says he wants to represent all Americans but then he calls us ‘chumps?’ It’s just another Joe Biden lie,” Worthington said.

Asked if it would hurt Biden in Bucks County, Worthington said “It’s just going to get us Republicans fired up.”

Worthington is the founder of “Republicans 4 Trump,” which he says is the largest grassroots political action group in the state. It’s “dedicated to supporting the Republican Party in the Pennsylvania Congressional First District,” according to the website.

The group also had a car parade on Saturday. “We were expecting about 700 cars,” Worthington said. “We had more than 6,700 cars, a two and a half hour line from Newtown to Doylestown.”

And how does Worthington think Trump will do in Bucks County?

“Our job is to keep it close, and I think we will. We’ve spent $500,000 on get-out-the-vote efforts among low-propensity voters in the First CD who are pro-Trump. If we can keep it close here, Donald Trump will win Pennsylvania,” Worthington said.