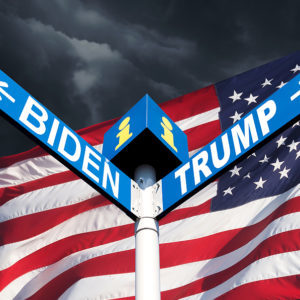 Let’s count the ways. First there was the pandemic. Or did the protests and riots come first? Next there was the death of a respected Supreme Court justice. Oh, and then there was President Donald Trump, the pandemic-denier, coming down with COVID-19.

The atmosphere is simmering with so much controversy, so many views, so much news, that it’s really hard to sort out what’s more important and what will happen next.

Right now, focus is on the latest medical bulletins on Trump. He says he’s fine, don’t worry about it, but then in February he was saying don’t worry about COVID-19. Now that he’s got it, he might be expected to be saying, I was wrong, I’ve seen the light and I know anyone can get it any time.

But he still seems not to have fully grasped the meaning of what he and millions of others are suffering.

He’s not, as his doctor said, “out of the woods” just yet. Considering all the medical attention he’s getting, you have to believe he’ll be okay, that in a week or two he’ll be declared totally “cured,” and he’ll be looking forward to his next debate with Joe Biden, the former vice president who’s still favored to get elected president a few weeks from now.

How could it be, people have been asking for some time, that the richest, supposedly most advanced country in the world, could have about the world’s worst record in combating the pandemic?

The problems, however, go far beyond simply the disease. While the stock market has been doing quite well, millions of Americans are out of work or under-employed, and many of them are facing the terrors of a winter with inadequate food and shelter.

The Republican Trump and his Democratic foes have failed abysmally on funding another round of emergency funding for millions on millions who desperately need it. Now Trump says he’ll ram through a stimulus bill to his liking after winning the election. His bill offers far less than the bill promoted by Democratic leaders in the Congress.

One thing is sure: If Trump does win, he’ll face a resurgence of the protests that have been rocking American cities ever since the killing of George Floyd by a Minneapolis police officer in May.

Meanwhile, on the way to the election, Republicans and Democrats will be fighting mightily over Trump’s pick of the conservative Chicago judge, Amy Coney Barrett, as Supreme Court justice successor to the late beloved liberal Ruth Bader Ginsburg. You can just hear the firecrackers exploding in arguments in the Republican-controlled Senate.

No one will be watching the drama more closely than Kim Jong-un in Pyongyang. By now he may be figuring he’s gotten nowhere with Trump, despite their three meetings, and may see Biden as offering prospects for a fresh start.

Biden, however, is no stranger in the White House. Having been vice president for two terms under President Barack Obama, he has to know a little about the frustrations of dealing with North Korea. Obama’s policy called for “strategic patience” ― do nothing and maybe the problem will go away.

Trump persisted in saying his presidential predecessors should have taken care of North Korea. He stupidly believed he had settled matters in June 2018 when he and Kim embraced in Singapore and signed that piece of paper resolving to work for a nuclear-free “Korean Peninsula.”

Lately, the president of the U.S. has stopped talking about North Korea except for tiresome claims to have headed off a second Korean War. By now he may know that coming to terms with North Korea, like shaking off COVID-19, is not that easy.

The bottom line remains the same. Kim’s still got his nukes and missiles, and he’s not giving them up for Biden any more than he did for Trump.