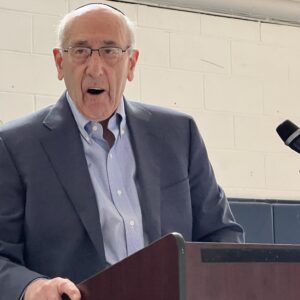 A Holocaust Survivor Talks to Students at Barrack Hebrew Academy

When Emil Fish talked to students at Jack M. Barrack Hebrew Academy in Bryn Mawr on Holocaust Remembrance Day, he spoke from memory. His own.

Fish, 87, is a survivor of the Holocaust, and he looks for opportunities to share his story with groups around the Delaware Valley. He told the Barrack Academy students they would be the last generation to hear from the Holocaust survivors in person and it would be up to them to tell others about that horrific event in the future.

“Faith in Hashem (God), physical strength, having money, knowing the right people and the goodness of strangers” helped his family survive the Holocaust, he said. “Among them were many, many who were not Jewish.”

Fish lived with his Hasidic family in Bardejov, a small town in eastern Slovakia where a third of the population was Jewish. Before World War II, Czechoslovakia was a democratic country. But it was rife with antisemitism, and Fish was bullied at public school.

After World War II began, the Nazis ordered Jews in Bardejov rounded up to be sent to Auschwitz. However, his family was among those allowed to stay because the Nazis deemed his father’s business, which was groceries, lumber, and railroad ties, essential.

Some 90 percent of the town’s Jews were sent to Auschwitz on the “first official transport,” and most did not return. Two years later, the Nazis ordered all the Jews to one area “so it would be easier to arrest us and finish us forever,” Fish explained.  His family moved to a town in the western part of the country. 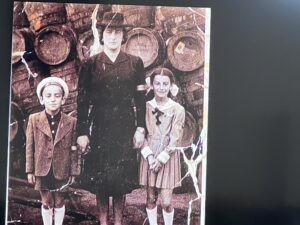 Emil Fish with his mother and sister. His sister refused to wear a yellow armband the Nazis required for Jews.

Early one morning, his mother went to get fresh bread. As she was crossing the railroad tracks, a Gestapo officer stopped her and accused her of being a Jew. A railroad guard who knew her convinced him she was a Gentile. At that point, his parents knew they had to leave. They found refuge at a farm and hid in a barn attic.

They stayed there for a few months until it became too dangerous. A guide took them to another farmhouse in a small village.

But the farmer who “never had any money before” went to a tavern, drank, and bragged that he had money from hiding Jews.

They had to leave again and hired another guide to take them to the nearest train station through a forest. A forest ranger they encountered shot at their guide as he ran away, but Fish’s father gave the ranger money and his mother’s fur coat. The ranger let them go.

At the train station, there were German soldiers. The children acted like peasants as instructed by their parents and the soldiers ignored them.

After disembarking in Bratislava, they went to an apartment. The owner notified the Gestapo leading to their arrest.

“We were sure they were going to shoot us and dump us in the river,” he said.

The Germans then separated his father from the rest of the family and sent him to Buchenwald.

“That was the scariest moment of my life,” said Fish.

His mother, sister, and Fish were put into a cattle car “packed like sardines” and headed to Auschwitz. “There was no food, no water, no sanitation facilities on the train,” he said. The tracks going to Auschwitz had been bombed, and the train was diverted to Bergen-Belsen, another concentration camp. Fish was 9 years old.

Soldiers yelled at them. There were German shepherd dogs and floodlights, he remembered.

“Bergen-Belsen was a scary place, getting worse and worse every day. There were piles of thousands of corpses stacked in front of his barracks at the camp.” Fish saw people die daily of starvation and diseases, including typhus, “right before our eyes.” 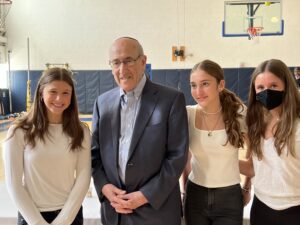 “We had to wake up every morning, stand in a roll call, and wait for officers to make sure nobody escaped,” he said. “Many times people died standing…Surviving was a daily challenge.”

On April 15, 1945, British soldiers liberated the camp. Unfortunately, some of the desperate and hungry died from overeating or eating the wrong food afterward. “It was chaos.”

Fish’s family made their way back to Bardejov, and amazingly, Fish’s father had also survived. Only 10 percent of Slovakian Jews survived the Holocaust. Fish went to Israel to study, and his family went to Canada.

His parents insisted he join them in Canada and the family then settled in Los Angeles in 1955. Fish now divides his time between Los Angeles and Lower Merion, where his daughter lives.

“I never had any intentions of ever visiting Bardejov, but my children– I married and had three kids—insisted on going on a heritage tour.” So in 2005 two of his three kids went with him and his late wife to his hometown. Fish is also the grandfather of 12.

He had intended to visit the cemetery.

“What I found broke my heart,” he said. “The Jewish cemetery was overgrown with weeds.” The synagogue was a hardware store and the Jewish school had become a school of commerce.

“There were no Jews living there any longer and no evidence of our rich and vibrant past,” he said. He used his own money and started a foundation to restore the cemetery and build a memorial for the 3,381 Jews from the town who were killed in the Holocaust “to make sure they remember and to make sure this never, never happens again. I would not let Hitler win.” 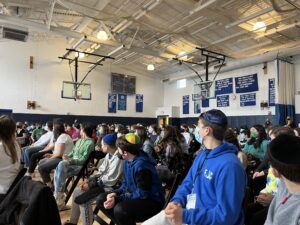 Answering questions from students, Fish said he did not lose his faith because, “Jewish history is full of tragedies.”

“I don’t blame God for what happened. I blame human beings.”

“There is no Holocaust survivor that doesn’t think about the Holocaust every day because it affects you so much,” he said.

Fish studied engineering at the University of Southern California and was hired by Bechtel Corp. He went on to become a land developer and a retirement home businessman. In 2005, he gave up most of his business to focus on projects, including writing and lecturing about the Holocaust. He also founded the Fish School of Holocaust Studies at Yeshiva University.

In 2010, former President Barack Obama appointed Fish to the United States Commission for the Preservation of America’s Heritage Abroad, on which he still serves.

The parents of two Barrack Academy students whose relatives were from Bardejov came to hear Fish’s lecture and speak with him. He remembered their relatives and greeted them warmly.

“It’s the next level of Jewish geography,” joked Deena Kobell, also of Philadelphia, whose grandfather, Adolf Leiner, was also a survivor from Bardejov.