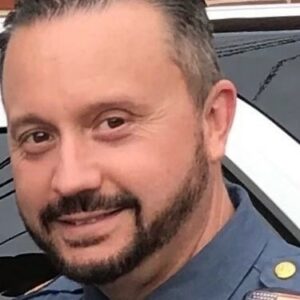 That was the chant from an angry, standing-room-only crowd as Yeadon Borough council members at a special meeting Thursday night as it voted to oust Police Chief Anthony “Chachi” Paparo after four years in the position.

“This night will go down as a day of infamy,” Yeadon Borough Mayor Rohan Hepkins said.

It was an end Paparo and his supporters saw coming. A newly-elected Black majority led by Council President Sharon Council-Harris made it clear they were poised to remove the popular law-enforcement officer, who is white, at a meeting a week ago.

The vote was delayed to give Paparo a chance to defend himself against allegations that his financial bungling of the department cost the borough $387,000.

Council members sat through a two-hour due-process hearing for the former 32-year veteran Upper Darby police officer before voting to terminate him and replace him.

The chief’s camp promised to sue the borough over the decision, and his backers believe the decision to remove him was racially motivated.

Paparo’s attorney, Harold Goodman, cited internal conversations among councilmembers regarding replacing Paparo with a Black colleague who fits the demographics of the majority Black municipality of 11,500 in Delaware County.

A legislator phoned one of Paparo’s detectives and offered him the job, telling him to draw up contract details of what he expected, Goodman said. The mayor picked Lt. Shawn Burns as interim police chief.

Giving a detailed timeline of events that included a meeting to offer the chief a three-month buyout, Goodman asked the four council members who ultimately voted to remove Paparo to recuse themselves. He said their impartiality was in question as they basically accused the chief of “wage theft” and were acting as both “judge and executioner.”

He called the due-process hearing a sham, claiming borough solicitor Mark Much was in touch with police union officials the day before the hearing about finding a replacement. Much claimed it “never happened.”

Dressed in dark slacks, a collared shirt and tie with his badge and gun clipped to his hip, Paparo pleaded his case as his wife stood by his side. For about 30 minutes, he recounted how the department changed for the better under his leadership.

Council President Sharon Council-Harris cited a $387,000 fine that arose out of a grievance with the Fraternal Order of Police as the reason for the chief’s dismissal.

Goodman said the consent order the borough entered into over the fine had a no-fault clause and it was unfair to saddle Paparo with blame. He called the fine a “pretext” and a “coverup” for the council’s real motivation to get rid of Paparo.

Paparo explained that staff shortages in 2019 and 2020, during the height of the pandemic and civil unrest, caused him to apparently go over the number of hours designated for part-time officers. Some of those part-time officers became full-time hires, Paparo said, adding the contract language was unclear and he would have been vindicated if the grievance went to arbitration.

“It doesn’t work today in this environment,” he said, holding up the collective bargaining agreement.

Paparo said any staffing decisions he made were first run by Mayor Rohan Hepkins.

Paparo admitted being stung when he walked into the last meeting and saw the oversized check with the amount of the fine prominently displayed at the front of the room.

“That destroyed me,” Paparo said. “There was no reason to humiliate me that night by putting that check up. That was beyond wrong. It was despicable.”

Paparo concluded with a simple “Do what you will,” before walking away from the podium and embracing his attorney.

Councilwoman Liana Roadcloud, who is Black, said it was disingenuous for colleagues to claim the chief’s removal was financially motivated. She accused colleagues of frivolously spending taxpayer money on reimbursements for hotel stays and lunches.

Supporters felt so strongly about the chief’s leadership that more than 1,000 people signed a petition to keep him on the job, saying he made the community stronger and safer. They packed two meetings, recounting stories about the chief’s commitment to the borough.

One woman told legislators her 11-year-old son wanted to “grow up to be like the chief.”

“This man is not sitting behind a desk. This man is out on the streets keeping us safe,” she said.

Hepkins said it was unfair to hold the chief solely accountable since he is the chief executive of the borough.

“I’m embarrassed for Yeadon,” he said.