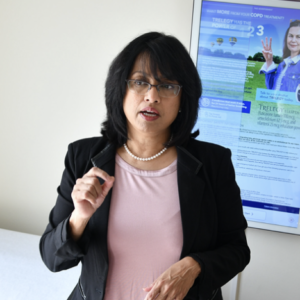 As an Asian American, I celebrate when others from the Asian community achieve positions of honor and rise to leadership roles. Such achievements are a wonderful reflection of the opportunity America offers.

As a Pennsylvanian, I care deeply about issues affecting my state and want a prosperous future for all our residents.

And as a Philadelphian, I’ve seen what happens when fiscal mismanagement is rampant, government corruption is unchecked, and public officials are unaccountable. The recent arrest of the Philadelphia City Treasurer is deeply disturbing.

Nina Ahmad is the first Asian American running for the statewide office of auditor general. It should be good news to the Asian American community that she has made Philadelphia her home and that she rose to public service, eventually becoming Deputy Mayor under Mayor Jim Kenney, a position she held from 2016-2017 before leaving to run unsuccessfully for Congress and then for Lt. Governor in 2018.

I wish I could celebrate her current campaign to be the state’s fiscal watchdog.

But unfortunately, her role in Philadelphia’s fiscal mismanagement instead raises red flags.

Let me say first I have no political allegiance to either party. I’m a registered Independent and care about the integrity of our government far more than its party stripe. I have voted Democrat and Republican in the same ballot and plan to do the same this November.

I served with Nina Ahmad on former Philadelphia Mayor Michael Nutter’s Commission on Asian American Affairs from 2009 to 2015.  She was the chairperson, while I was on the finance committee.

During that time, the Commission held two fundraising events to support Asian communities. Nearly $40,000 was raised, but none of it was spent to help the Asian community. Years later, there has yet to be any public accounting of these funds, despite my repeated requests.

Of course, misdirected money is nothing new for Philadelphia. The city has been in the news for losing track of $33 million, amassing $924 million in accounting errors, and similar ‘oversights’.

Yet what’s truly troublesome is the lack of response I’ve received from Ms. Ahmad and other city officials as I’ve tried to get to the bottom of this.

In late 2016, by which time Ms. Ahmad was working in Mayor Kenney’s administration, I wrote to her and members of the Commission on Asian American Affairs requesting a financial accounting of the Commission’s activities. I did not receive a reply but learned from the Commission later that year that Mayor Kenney had referred the matter to his law department.

In March of 2017, having received no additional information, I sent an inquiry directly to Mayor Kenney, again asking for an accounting of these funds that were raised to help the Asian community.

Eventually, Ms. Ahmad released a Ledger of the Fund of Philadelphia, Inc. to a journalist, only to raise more questions as it accounted for only half of the $40,000.

By its own description, the Department of the Auditor General is charged with “using audits to ensure that all state money is spent legally and properly.” The department’s mission is “to serve the people of Pennsylvania by improving government accountability, transparency, and the effective use of taxpayer dollars.”

Our state is already facing fiscal crisis—from falling revenue due to the COVID pandemic to unemployment that continues to lag behind the nation. We are also facing a crisis of trust, as public officials have all too often broken the public trust for their own gain.

Moving ahead, Pennsylvanians who have been through so much hardship this year deserve an auditor general who will ensure that funding is going where it should be going and helping whom it should be helping.

At the very least, we deserve an auditor general who will respond with transparency to questions the public asks.

Perhaps there is an explanation for the $40,000 that never reached the Asian community. Coincidentally, Nina Ahmad became the deputy mayor for public engagement, leaving the money in the Mayor’s Fund. Because of a lack of transparency, we may never know.

If we can’t trust Ms. Ahmad to provide accountability and transparency for $40,000—a relatively paltry sum in the context of state budget spending—how can we expect her to watch over the many billions in taxpayer dollars that flow through Harrisburg each year?

This is a question Pennsylvanians deserves to have answered before casting their ballots this year.