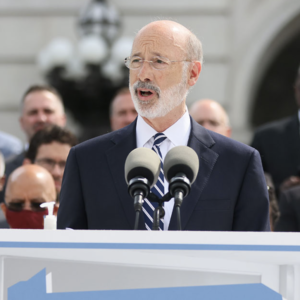 Is it true, as Gov. Tom Wolf said at a Tuesday press conference, that Pennsylvania ranks 45th in school funding in the U.S.?

Technically, perhaps. But his critics question his math, saying once he “shows his work” as teachers say, the real spending number is very different.

Only 11 percent – or $700 million – of state funding ran through the fair funding formula last year. The other $5.5 billion was disbursed using the system stuck 30 years in the past, Wolf said. The fair funding system is supposed to level state funds with calculations based on population and district needs.

But the formula’s “hold harmless” provision guaranteeing no reduction to a school’s funding regardless of declining enrollment keeps most of the money from being distributed on that basis.

Even Wolf’s opponents agree it’s a legitimate issue for discussion. But proposing billions in new spending based on the premise that Pennsylvania’s education is underfunded is a different matter.

Is it really true that Pennsylvania ranks “45th in school funding,” below states like South Carolina and Mississippi?

Yes, it’s true state government’s share of total school spending is among the lowest in the nation. That is, of all the money Pennsylvania taxpayers spend on K-12 education a relatively small portion comes from the state. According to a National Center for Education Statistics report using 2018 data, just over 38 percent of public school education funding came from the state. In some states, like New Mexico and North Carolina, the state’s share is well above 60 percent.

That’s the number Wolf is using.

But when it comes to what most people mean by “school funding” — the amount of tax money spent on schools — Pennsylvania ranks near the top. A US News and World Report ranking last year based on 2017-2018 numbers put Pennsylvania fourth in the nation in education spending.

According to Corey DeAngelis, National Director of Research at the American Federation for Children, the Keystone State’s spending is even higher.

“Gov. Wolf and his team are using a bogus metric,” DeAngelis told Delaware Valley Journal. “The reality is the latest numbers from the U.S. Census Bureau show Pennsylvania funded K-12 public schools at $21,206 per student in 2019. That funding amount – 35 percent higher than the national average – puts Pennsylvania in 6th place when it comes to total funding per student.”

Colleen Hroncich, Commonwealth Foundation senior policy analyst is even more blunt: “The share of state funding in Pennsylvania only looks smaller because the amount of local funding to districts is, on average, enormous. If Gov. Wolf wants the ratio between state and local education funding to be more like other states, we’d have to cut local funding to bring it in line with the national average. Since no one really wants to do that, it’s clear that the ‘state share’ talking point is meaningless.”

As for the claim the state isn’t paying its fair share, according to Pennsylvania Department of Education data compiled by the Commonwealth Foundation, state aid for public schools has grown by 32.6 percent since 2012.

Wolf argues projected $3 billion in state surpluses and $7.3 billion in federal COVID relief gives Pennsylvania the money to run all state funding through the formula. But Republicans are pushing back.

“Due to excess deficit spending from the Wolf administration and budget projections dramatically handicapped by an economy languishing under the governor’s shutdown over the past year, Pennsylvania’s budget situation is not as rosy as Democrats would make it out to be,” said House Republican Caucus spokesperson Jason Gottesman.

“While Republicans have and will continue to ensure our commitment to funding education, we are not in a position to use what financial flexibility we do have to make promises beyond our ability to fulfill them. Our plan for spending federal stimulus dollars will be reflected in the budget we produce. Currently, we are going through the guidance from the federal government on how the money can be spent, taking into account the years of deficit spending from the Wolf administration that needs to be addressed in this budget, and making sure we are responsible to taxpayers by not raising taxes in any potential budget plan we put together.”