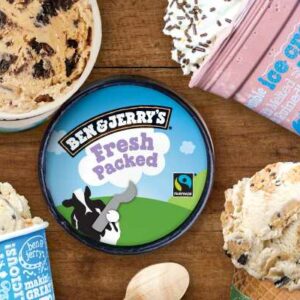 In Florida, Gov. Ron DeSantis has staked out a tough stance against Ben & Jerry’s for boycotting Israel, threatening legal action. In Texas, State Comptroller Glenn Hegar announced on Thursday he directed his staff to determine whether the ice cream company or its parent company Unilever took any action that would trigger his state’s anti-boycott law.

But Pennsylvania, led by Democrat Governor Tom Wolf? Not so much.

Ben & Jerry’s recently announced it will not license its ice cream for sale in East Jerusalem and the Israeli towns in the West Bank, also known by the Biblical names Judea and Samaria. This move was welcomed by the anti-Israel Boycott, Divestment and Sanction (BDS) movement.

Like 34 other states, Pennsylvania has an anti-BDS law to take aim at companies that boycott Israel. However, in an email Friday, a spokeswoman for Wolf claimed Pennsylvania doesn’t have any business contracts with either Ben & Jerry’s or Unilever.

“DGS [the Department of General Services] has reviewed existing vendor contracts and the commonwealth does not have any vendor contracts with Ben & Jerry’s or with its parent company,” Lyndsay Kensinger of Wolf’s office wrote. “Act 163 of 2016 does not apply in this case.”

State Rep. Aaron Kaufer (R-Luzerne) was the first legislator to urge the state to invoke the anti-BDS law. While he appreciates the Wolf administration “checking our current state contracts,” he believes the governor’s response does not follow the letter of the law. Kaufer says it applies, not just to Unilever itself, but to vendors reselling Unilever products.

State action would apply “as long as their boycott of Israel (lasts),” he said. “That means no Lipton Tea, no Klondike Bars, Breyers Ice Cream, no Q-tips, no Vaseline. It means that Pennsylvania stands up for its values and principles and stands firm against anti-Semitism.”

“It’s interesting to see how different states are handling this,” Kaufer added. “And I think right now, we’re falling short.”

One difference between Pennsylvania and many of the other states’ anti-BDS law, Kaufer notes, is that it doesn’t mandate the state pension fund divest any shares of companies that join the BDS movement. Unilever is a publicly traded company.

In a strongly worded letter to the Florida Board of Administration, DeSantis said, “the State of Florida does not tolerate discrimination against the State of Israel or the Israeli people, including boycotts and divestments targeting Israel.” He instructed the FBA to put Ben & Jerry’s and Unilever on a “scrutinized” list of companies and to take action if the corporation does not cease its boycott, including refraining from “acquiring any and all Unilever assets.”

And Texas Comptroller Glenn Hegar told his staff to look into whether the state should divest its funds from Unilever. Hegar told his fellow Texans to eat Blue Bell ice cream, which “was founded in Brenham, Texas and tastes much better than the overpriced, stuck-up stuff made by a foreign-owned company started in Vermont.”

Kaufer noted DeSantis condemned Unilever’s action against Israel immediately and sent a letter to his administration to source products from other companies rather than Unilever.

“That’s the action I expect our governor to take,” said Kaufer. “Anything short of that is unacceptable.”

And according to media reports, the Vermont-based company’s independent board wanted to go even further and end sales in Israel entirely.

There appears to be a partisan breakdown in the response. Democrat Wolf has largely remained silent while Republicans like State Treasurer Stacy Garrity are ready to act.

Republican Lou Barletta, a former congressman running for governor in 2022, said, “It’s disheartening to see an American company take such an anti-Semitic stance for our long-standing ally, Israel. We are seeing the radical left’s push of an anti-Israel and anti-Jewish movement catching steam, and it must be shut down.”

And Republican U.S. Senate candidate Kathy Barnette said, “Calls to boycott Israel, our number one ally and the only democracy in the Middle East, are intentionally discriminatory and anti-Semitic. Caving to left-wing mobs on Israel should not be rewarded with taxpayer dollars. Pennsylvania should follow the 2016 anti-BDS law and cancel all contracts with Ben & Jerry’s and Unilever immediately.”

The notable exception is Democrat Attorney General Josh Shapiro, who sent a letter to Kaufer condemning the boycott. “BDS is rooted in anti-Semitism,” Shapiro wrote. “I expect Commonwealth agencies with jurisdiction to enforce the Act.”