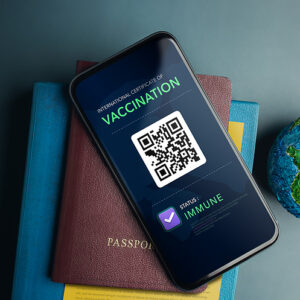 Gov. Tom Wolf endorsed the idea of a so-called “vaccine passport” during a stop in Dauphin County on Tuesday, comparing it to the requirement Americans face when traveling abroad. Republicans in the General Assembly, however, have already signaled their opposition.

Vaccine passports are in the news since word leaked over the weekend the Biden administration was working on creating a federally-approved way for people to prove they’ve been vaccinated against COVID-19, most likely relying on smartphone technology. New York state has already launched the nation’s first state-run vaccine passport system, the Excelsior Pass, projected to be in use by arts and entertainment venues by April 2.

The White House now says it plans to leave the development of any vaccine passport system to the private sector.

Wolf revealed his support while visiting a mass vaccination site. Asked if he supports vaccine passports, he said “yes.” When pressed on the issue Wolf initially said, “You used to have to have one when you traveled overseas.” He added, “I would think that’s a fairly easy thing to do.”

“Every Pennsylvanian who wants a COVID-19 vaccine should have the opportunity to get one, and we are working hard to make sure that happens sooner rather than later. However, those who cannot receive the vaccine due to medical reasons, arbitrary vaccine deployment phases, or personal choice should not be discriminated against, especially as we work toward herd immunity,” Benninghoff said. “The idea of so-called vaccine passports is an opening to unfathomable government intrusion into people’s personal lives, particularly their private medical information. I hope the Wolf administration and my fellow lawmakers join me in opposing this ill-conceived idea.”

Benninghoff said his concern is rooted in Pennsylvania’s pattern of following New York’s example in responding to COVID-19. The Wolf administration’s coordination with New York will be part of an investigation by the House Oversight Committee on the handling of nursing homes during the pandemic.

Forced vaccination is already a topic of discussion in the legislator. Sen. Doug Mastriano (R-Adams, Cumberland, Franklin, and York), a potential 2022 gubernatorial candidate, has introduced SB 741, the “Medical Freedom Act.”  According to the co-sponsorship memo, “The state government shall not impose a vaccination upon ourselves – or our children – without consent.  Nor should the government mandate that employers require vaccinations.”

Wolf did say at the end of his answer, “if that were something that came from the General Assembly, yeah, I’d support that.” It’s unknown if he feels a “vaccine passport” would need legislative approval or not. Based on today’s statement from Leader Benninghoff, who controls the House calendar, it doesn’t appear there is support.