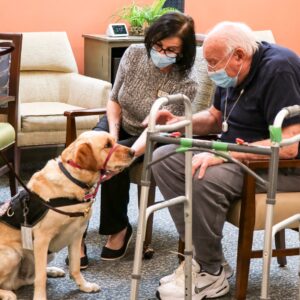 Entering a courtroom can be intimidating, even if you do not have to take the witness stand and testify under oath. For some people, the fear is overwhelming.

But the reassuring touch of a comfort canine can help alleviate that apprehension and anxiety, leading to better outcomes in the pursuit of justice.

U.S. Reps. Mary Gay Scanlon (D-Delaware Co.) and Mariannette Miller-Meeks (R-Iowa) have introduced the Courthouse Dogs Act. The bipartisan bill would allow the Department of Justice to develop best practices for the use of therapy and support dogs within a federal courtroom. 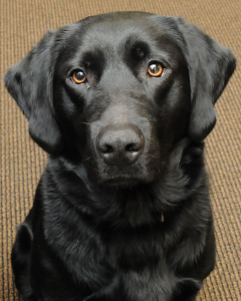 Under the proposal, courtrooms would be able to use a certified facility dog, meaning one that has completed assistance dog training. The bill also stipulates either side in a case could apply to use a facility dog.

While the Courthouse Dogs Act would only apply to federal facilities, the Chester County District Attorney’s Office presented the case of Commonwealth vs. Purnell to the Pennsylvania Supreme Court, asking to allow support dogs in state courtrooms, as well.

Chester County District Attorney Deb Ryan spoke with the Delaware Valley Journal about the dogs and their use in court proceedings.

“We’re waiting for the Supreme Court of Pennsylvania to issue a ruling on this case,” said Ryan. “This is a matter of first impression in Pennsylvania allowing comfort dogs to help with victims or witnesses who may have some fear or anxiety with testifying. So, what we’re hoping with this Purnell case that we handled here demonstrated there’s clearly a need for certain vulnerable victims or witnesses to have the additional comfort of a dog.

“We already afford that special kind of accommodation for certain types of cases,” Ryan added. “So, this may be something that levels the playing field for us. This is all about us being truth seekers, and trying to figure out what happened. There are certain victims and witnesses who are vulnerable or fragile or have fear or anxiety and without having the assistance of a comfort dog are incapable of testifying. So, for us, this is potentially a huge win for victims and witnesses in our pursuit of justice.”

The certain types of cases Ryan mentioned typically involve children or disabled victims or witnesses. For those individuals, having a support dog accompany them to the witness stand changes the entire experience.

There are also times when an individual will feel more comfortable confessing details of an event to a dog rather than to another person, which Ryan said she has seen on more than one occasion.

“[Using support dogs] is something that can help alleviate the fear and anxiety that victims and witnesses may have,” she said. “Especially if they’re in a courtroom with the person who was their abuser or in this case with Purnell, we’re seeing a case with a child who is autistic with severe anxiety who was witness to a homicide. These are certain things that just make it a little bit easier for someone to come in and testify.”

In Bucks County, the most popular employee at the courthouse is a dog named Daisey. The golden retriever has made a lasting impression on employees there. 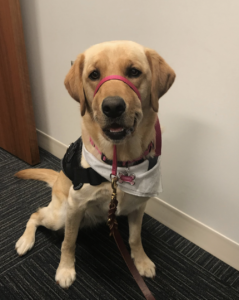 Daisey, the Bucks County Courthouse comfort dogA golden retriever named Daisey has made a lasting impression on the other employees there.

“We have a fully trained comfort dog, Daisey and she was trained for two years before we got her and we had to go through a rigorous training process as well,” said D.A. Matthew Weintraub. “She is just the hardest, most kind-hearted employee that anyone could ask for.”

Daisey trained in the Muncy state prison for two years before working at Bucks County and it wasn’t a simple process for the courthouse either.

According to Weintraub, the courthouse employees also had to receive specialized training, in-house visitations, and a probationary period to qualify for a facility dog. Ultimately, Daisey was placed with Bucks County courthouse based on her disposition.

“Just having her here in the office and dealing with the types of terrible, tragic things that we deal with on a day-to-day basis, she really lifts all of our hearts here,” he said.

While support dogs steal the hearts of those they meet, there’s a specific concern to having one in the courthouse.

Some feel the use of a courthouse support dog is a potential issue for the jurors of the case. The argument is that the presence of a support dog could sway some jurors’ opinions by shifting their sympathies. This is an argument that Weintraub said shouldn’t be used.

“I understand why people would raise that but to me, I think that’s easily overcome,” Weintraub said. “Number one, the judge would explain to the jury, and the judge already explains and would continue to explain to the jury that they’re not allowed to decide this case on any type of emotion or sympathy. And number two, what would end up happening is Daisey would not even be within the jury’s sight, but for maybe the five seconds it takes her to go to the witness box and the five seconds it takes her to walk back from the witness box. By that time, the testimony is over.

“Daisey is not trained to be the center of attention. She’s trained to give support to the person that needs it the most and that would be the person testifying.”