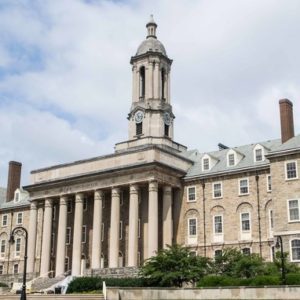 Small businesses everywhere are struggling with the impact of coronavirus shutdowns, but those in college towns will be particularly hard hit as thousands of students have gone home and won’t be returning this school year — even after shutdown orders are lifted.

State College, Pennsylvania, home to Penn State University, emptied out on March 6 when students left for spring break and then were told not to come back as the university would shift to “remote instruction” in the midst of the COVID-19 pandemic.

He was at his 9,000-square-foot store last week, but with a skeleton crew, receiving a shipment and fulfilling web orders and doing — he estimates — 20 percent of his usual business.

“We’ve been in business 46 years and we’ve had some great years and we’ve had many, many thin years,” Brugler said. “And, we’re coming off a really mediocre winter, so we don’t have the cushion that we would normally have this time of year and that’s affecting things. It’s really a perfect storm. Everything came crashing down, you know, at once.”

Brugler says he’s negotiating with his landlord over his April rent, while most of his 32 employees are on unemployment.

In many states, college communities are a key engine for the local economy. According to a 2017 study by the Anderson Economic Group, Michigan’s three largest higher-education institutions — Michigan State University, the University of Michigan and Wayne State University — generated $18.7 billion in economic activity.

Kurtis Cummings, owner of the Switchyard Brewing Company in Bloomington, Indiana — home to Indiana University — is also worried about rent.

He has an 8,800-square-foot building on a main street in the downtown area, where rents have risen dramatically in recent years and now start at $12 per square feet (annually), putting his rent at $8,000 a month or more. His monthly revenue, he says, is typically about $80,000 a month.

His brewery isn’t totally shut down.

“We’ve stripped our staff down to basically just me and my wife and our business partner, Jeff,” Cummings told Delaware Valley Journal. “We are doing all the deliveries and all the order fulfillment ourselves and basically working for tips, in order to still pay our mortgage and that kind of thing.”

In addition to the loss of most of their revenue from customers, Cummings says in the last two weeks the brewery lost $12,000 in canceled special events fees.

Indiana University followed many other schools in announcing on March 15 that students wouldn’t be returning to campus after spring break and instead finish the semester online. All spring events, including graduation, were canceled. On March 26, the university announced that summer classes would also all be online, with students not returning to campus until August.

The same day, Cummings posted to Facebook a video of his phone call to the Small Business Administration’s disaster loan program, with the automated voice recording: “You are caller number five hundred and forty six… He wrote in the post that this is the reason small business owners are pleading with the city to release food and beverage tax dollars to help small businesses.

“By the time the SBA processes our disaster loan application, it’ll be too late,” he wrote.

“I think it’s very much possible, talking to other business owners in town, that, if there’s not some sort of emergency stop-gap relief between now and when the SBA funds come through, a month from now, you’ll probably see 20 percent of the downtown businesses close,” says Cummings. “Like permanently destroyed, closed. I could see, in the next two months, I can see 50 percent of more being closed. That’s how serious it is.”

And most small businesses like his can’t get help from banks.

“If I go to a bank and I say, ‘Hey, this is, you know, what’s going on, I need an emergency loan,’ they’re going to laugh at us,” he says, “because why would you lend money to a business that doesn’t have any income coming in?”

They do have some money coming in from deliveries and takeout, he says, but not enough.

“I would say we’re doing better than some, but we are not doing enough to be sustainable. We’re basically barely treading water, you know, basically just trying to get enough revenue in to pay the necessities.”