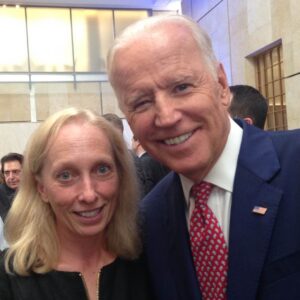 With an Eye to 2022, DelVal Dems Shy From Criticizing Biden

While some Delaware Valley Democrats like U.S. Rep. Chrissy Houlahan (D-Chester) have spoken out passionately about the fiasco unfolding in Afghanistan, pundits note they’ve been careful not to criticize the person most responsible: President Joe Biden.

According to pundits, it’s part of a national effort by more moderate Democrats to maintain support for Biden while avoiding fallout from the failed Afghanistan withdrawal.

“Vulnerable Democrats — and those lawmakers running for other offices — are walking a fine line on the issue,” reads the report. “They’re stuck between a need to express their dismay at the debacle in Kabul and their desire to avoid sharply criticizing President Joe Biden.”

Historically, midterm elections are difficult for the party in power –in this case, Democrats — and the polling trends are even more unfavorable than usual for Biden and his party. That’s particularly true in a purple swing state like Pennsylvania.

Meanwhile, Biden continues to defend his actions in Afghanistan.

In a recent interview with ABC’s George Stephanopoulos, President Joe Biden talked about the ongoing crisis in Afghanistan that’s come about after the precipitous withdrawal of American troops, defending his decisions.

While Houlahan, a veteran, was passionate about the tragic scenario that’s unfolding, others have been more circumspect. Decrying the loss of life but not pointing a finger at the commander-in-chief.

For example, U.S. Rep. Mary Gay Scanlon (D-Delaware Co.) called the situation “absolutely devastating” and offers “prayers” for “our service members who are still in harm’s way and the Afghan people.”

She also acknowledges the veterans who lost their lives or were wounded during the Afghan conflict.

“It is my sincere hope that the Biden administration acts swiftly to ensure the safe evacuation of our many allies who aided the American government and that we can work with the international community to help all those now at increased risk of violence and persecution at the hands of the Taliban.”

U.S. Madeleine Dean (D-Montgomery) did not immediately respond to a request for comment from the DVJournal. But she had tweeted, “Heartbreaking to watch the events in Afghanistan. We can analyze our regrets of the last 20 years another time. Right now: We must focus on safely evacuating all American citizens and allies. We completed our original mission – and we thank all Operation Enduring Freedom Vets.”

Her comment proved ironic since the State Department told the 5,000 to 10,000 trapped Americans at first to shelter in place, then warned them that they could not ensure their safe passage to the airport in Kabul.

“The President told us today that al-Qaeda no longer has a safe haven in Afghanistan. He is wrong. By his reckless decision, he has put countless women and young girls at risk. Thousands of terrorists have been freed from prison. Terrorists have been provided with a better safe haven than they’ve ever had. Al-Qaeda is now better equipped than they were before 9/11…As a result of this decision, America is less safe now than we were pre-9/11.

“Equally sickening, the administration has sent a message to the world that America lacks staying power. China has taken note. Iran has taken note. Russia has taken note. North Korea has taken note. The president has made our job on the House Permanent Select Committee on Intelligence even more challenging than it was before. This naïve view of national and international security must end now.”

Meanwhile, the horrific visuals continue to come out of Afghanistan. On Thursday, photographs showed “a man carrying a bloodied child, as a woman lays wounded on the street after Taliban fighters use guns fire, whips, sticks and sharp objects to maintain crowd control over thousands of Afghans who continue to wait outside the Kabul Airport for a way out,” according to media reports.

“In this moment, my immediate focus is on assisting any constituents who are seeking evacuation of colleagues and loved ones from Afghanistan,” Fitzpatrick added. “I will also continue to support the evacuation and resettlement of our allies from the region, as I have for almost a decade in my work prior to joining Congress. It is my sincere hope that the Biden administration acts swiftly to ensure the safe evacuation of our many allies who aided the American government and that we can work with the international community to help all those now at increased risk of violence and persecution at the hands of the Taliban.”