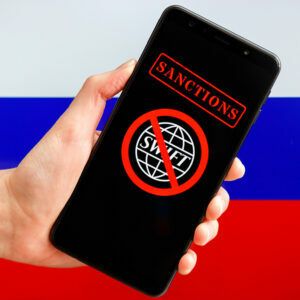 Why Is the SWIFT System So Important to Russia?

A SWIFT (Society for Worldwide Interbank Financial Telecommunication) code is almost always required when you are party to an international money transfer. SWIFT is what allows a specific bank account to be identified in an international banking transaction. Without the use of a SWIFT, generally, it is impractical or impossible to make an international transfer.

That is why SWIFT has gone viral on social media and in the news this week. As part of a package of sanctions against Russia for the invasion of democratic Ukraine, SWIFT was at its core.

Banning Russia and wealthy Russians from SWIFT is arguably the most powerful economic weapon the world has to stop Russian aggression. Assuming that the hypothesis that Russian President Vladimir Putin is taking a huge gamble in invading Ukraine and risking an ongoing conflict that could lead to deep internal fissures in his power base in Russia, what financial weapon could be more powerful against him than SWIFT?

“Given the fact that SWIFT has over 11,000 financial institutions around the world, any nation that sells a massive amount of a resource – as Russia does with gas and oil – will find themselves hard-pressed to find a viable legal option to receive funds if they are no longer allowed on the SWIFT system.”

On Thursday, rather than blocking Russian access to SWIFT, President Joe Biden explained the United States, joined by the European Union and the United Kingdom, would not block Russia from SWIFT. Instead, Biden is leaving the threat of a SWIFT ban on the table and is, for now, blocking the five largest Russian banks from the U.S. banking system.

But that decision came down around 10 hours before the Russian invasion of Ukraine hit the capital city, Kyiv. The move could and should be a game-changer for the allies, as this should be viewed as something that the United States actually minds enough to immediately ramp up sanctions as a message to Russia that this heightened aggression will not stand.

On Saturday evening, the U.S. and the European Commission along with Canada, France, Italy, Germany, and the U.K. announced they were expelling select Russian financial institutions from SWIFT.

If Russia is entirely removed from the SWIFT system, it has two practical options. For transactions limited to within Russia, they have their own version of SWIFT – the System for Transfer of Financial Messages. After Russia invaded Crimea in 2014 and feared that its SWIFT access would be revoked, it built this internal system.

The other option is, of course, cryptocurrency. Yet only the most ardent enthusiasts of crypto believe that such an incendiary currency is a wise base upon which to sustain an economy, even in the short term. The internal pressure the most powerful Russian businesses could put on the Putin regime if faced with wildly fluctuating payment options for their goods and services could be extreme.

Sanction options can change as quickly as the situation on the ground and in their skies over Kyiv, so this is a rapidly-evolving story that will be closely watched by all of the allies and by Russia itself as it considers its next moves.

Aron Solomon, JD, is the Head of Strategy for Esquire Digital and editor of Today’s Esquire. He has taught entrepreneurship at McGill University and the University of Pennsylvania and was the founder of LegalX, the world’s first legal technology accelerator. He wrote this for InsideSources.com.