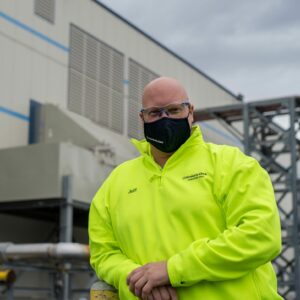 How does the Delaware Valley, best known for leafy suburbs and white-collar commuters, remain a hub of manufacturing jobs and industrial growth? For many business leaders, the answer is obvious: Energy. Particularly the low-cost, reliable, and relatively clean energy pouring in the Adelphia pipeline.

Manufacturing giant Kimberly-Clark recently invested $150 million into a new natural gas-powered steam plant at its Chester facility where it makes more than 2 million rolls of Scott 1000 tissue every day. The company’s mill there is a “critical employer” for Delaware County with nearly 600 workers, said county Chamber of Commerce President Trish McFarland. McFarland also noted the new plant will reduce carbon emissions by about 40 percent.

That reduction is good for business as manufacturers and others face strong headwinds from a White House and state lawmakers pushing to eliminate fossil fuels and promoting renewable energies, regardless of whether energy sources like wind and solar can meet current needs.

“The tissue manufacturing process requires not just electricity, but also steam and heat,” a Kimberly-Clark spokesperson said in a statement. “Currently, natural gas-fired cogeneration technology is the most reliable and cost-effective fit for tissue manufacturing. Solar and wind, and other alternative fuels, such as hydrogen, are many years out in terms of the technology and development of the supply chain.”

On his first day in office, President Joe Biden revoked permits for the Keystone XL Pipeline, which would have carried about 800,000 gallons of oil a day from Alberta, Canada, to Oklahoma. Activists are asking that Biden do the same to an oil pipeline in northern Michigan called Line 3. Last year, New York Gov. Andrew Cuomo blocked a pipeline that would have brought natural gas to New York City.

Pennsylvania, which has greatly benefited from the fracking boom, may enter a multi-state compact that will levy a carbon tax on manufactures and other businesses to reduce emissions.

“Manufacturing has the strongest multi-layer effect on job creation,” said David N. Taylor, president of the Pennsylvania Manufacturers Association. “It’s not just the jobs on the plant floor, but of all of the jobs in the supply chain, key vendors, and logistics for distribution. Our elected officials need to value manufacturing. If you lose that activity on the plant floor, all of those jobs go away.”

It took just two years to bring the 1.8-million square foot plant at Kimberly-Clark’s 61.5 acres on the Delaware River to life. The 26-megawatt cogeneration facility that uses natural gas is a major shift from the old coal-fired plant and will lower direct carbon emissions by 150,000 metric tons.

The Adelphia Gateway pipeline starts in northern New Jersey and snakes down through the Delaware Valley to end near Marcus Hook Industrial Complex. The conversion from oil to natural gas started in the mid-1990s, and NJR Midstream Company, which operates the pipeline, has begun converting the remaining 50 miles of the total 84-mile pipeline.

NJR received federal approval on its construction plans, but the project has not been without opposition. Officials in West Rockhill are appealing the December Federal Energy Regulatory Commission approval. The Delaware Riverkeepers also wants a new hearing. NJR plans to build a 10,000-square-foot compressor station in West Rockhill that residents and others oppose.

But the benefits of the project – economic growth, particularly – appear to outweigh environmental concerns.

Environmental activists and others, though, point to natural gas as not being clean enough, despite conversions from coal or oil facilities showing a decrease in emissions. The preferred resources – wind and solar – present national security implications as the rare earth minerals needed for solar panels are predominantly mined in China. Wind power can’t reliably power grids in extreme temperatures, as Texas learned again last month.

Taylor said manufacturers and others are eager to either stay or set up shop in Pennsylvania where natural gas is abundant, but hostility from state officials and an overall agenda to push natural gas sites the way of coal mines can imperil growth.

“The worst fallacy is ‘The energy’s here in Pennsylvania and the energy companies have to come here and do whatever we tell them,’” he said. “There’s other places around the world where companies can go. The mindset has always been, ‘We just need to be slightly better than New York and New Jersey,’ but Indiana and North Carolina aren’t far away.”