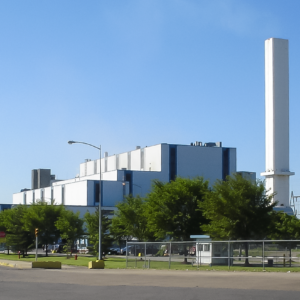 What Would Losing Covanta Mean for City of Chester, Delaware County?

The waste-to-energy facility in the city of Chester, owned by New Jersey-based Covanta Holding Corporation, has been the center of a decades-long controversy.

Critics, like Chester City Councilman Stefan Roots, want to see the facility shut down. He says the brunt of the impact of the burning is borne by local residents, many in low-income and minority neighborhoods. He was joined by community groups like Chester Residents Concerned for Quality Living who have alleged ‘environmental racism’ is at play.

Despite residents’ concerns, the City of Chester renewed its agreement with Covanta for a three-year term. The facility converts about 3,500 tons of trash into energy every day. That refuse comes from local Delaware County communities as well as from Philadelphia, New Jersey, and New York.

“Covanta Delaware Valley produces 87 megawatts of electricity 24/7, enough to power 48,000 homes for one year,” according to Nicolle Robles, a Covanta spokesperson. “The electricity is sold to the local grid and thus powering homes and businesses in Delaware County and in Chester.”

And, supporters point out, that is electricity not generated by fossil fuels like coal or natural gas.

Being home to the incinerator has some advantages. Pennsylvania’s Municipal Waste Planning Recycling and Waste Reduction Act requires all waste disposed at waste-to-energy facilities, like Covanta, to pay a host fee of $2-per-ton of trash processed. A Covanta spokeswoman says Covanta pays more than that.

Public records show two host fee amounts for Covanta customers–the Delaware County Solid Waste Authority (DCSWA)–pay a $2 host fee on top of their tipping fee, while other customers pay a $4.85 host fee. Interim CEO of DCSWA Jim Warner couldn’t explain the difference in the fees. “Covanta negotiates the fees with the City of Chester. It was last adjusted in 2017, but I don’t know why there is a difference in the fee for Delaware County and other customers.”

Covanta agreed to pay the City of Chester $5 million annually in the new contract. According to Mayor Thaddeus Kirkland, those funds go directly to the city’s general fund.

“The finances received from Covanta can be used for infrastructure projects, building repairs, law enforcement needs, and more,” Mayor Kirkland said. “If these funds were no longer available…that would lead to even more elimination of services for our citizens.”

But Chester’s state-appointed receiver says the city is being shorted nearly $10 million due to a deal the city signed with Covanta in 2017.

According to the Covanta website, the facility has 100 employees, 30 of which live within five miles of the incinerator. Robles expanded on Covanta’s impact on the Chester community beyond jobs within the facility. “Maintenance activities alone account for over $20 million per year spent in local communities,” she said.

The partnership between Covanta and the city also created scholarships for students, local clean-ups and tree plantings initiatives, food and health-related initiatives, and investment in STEM education, Robles noted.

Covanta’s presence also reduces residential and commercial trash bills. Waste created in the city, along with the surrounding Delaware County, does not incur the additional expense of transporting it to another location, such as the DCSWA-owned Rolling Hills landfill in Berks County. Warner said the county is looking into other options as part of a required update to their municipal waste plan. But he isn’t enthusiastic about the cost-effectiveness of alternatives to Covanta.

“The transfer stations that exist today do not have the capability of managing the waste to go to a more distant location,” Warner explained. “That would require changes to the operation mode; we would need more trucks and drivers.”

The expense to update DCSWA facilities and transport trash to more distant locations would have a trickle-down effect, leading to higher trash and recycling bills for residential and commercial customers.

“A lot of people are interested in what that means,” said Warner. “The authority is dealing with that and balancing the reality of the expectation of that contract with other things.”