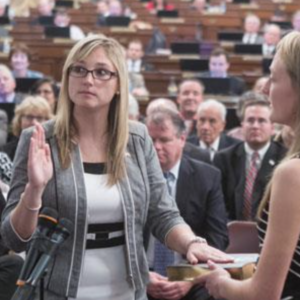 Welcoming the Rise of Women in the GOP

PHILADELPHIA  — With the much-celebrated rise of females in the Republican Party all across the nation, Pennsylvania saw its own wave of freshmen women sweeping into state government, much of which was based in the Delaware Valley.

Labs and Mackenzie  join Martina White, who was the first new Philadelphia Republican elected in 25 years when she first won in 2015 and Rep. Megan Schoeder (R—29th District), who has held her spot representing Buckingham, Ivyland, Warwick and Warminster since 2019.

Nationally, there are 36 Republican women joining the next U.S. Congress, which is six more than the record of 30 set 14 years ago. Among them are Iranian-American Stephanie Bice of Oklahoma, Cuban-American Maria Elvira Salazar of Florida and two Californian Korean Americans, Michelle Steel and Young Kim.

Political action committees such as Maggie’s List and Winning for Women have been working to attract more diverse candidates and this influx of GOP women has been chalked up to their grassroots efforts to do so.

Pennsylvania is experiencing its own wave of  new Republican women leaders being sent to Harrisburg to represent their communities, and it is a change welcomed by White.

The representative of Bustleton, Millbrook, Parkwood and Somerton, White looks at this past election as a harbinger of good things to come for the Republican Party and for women in leadership roles.

“We need strong leaders, and we need people who are willing to step up and serve their communities,” said the Northeast Philadelphia native, who is the first in her immediate family to graduate from college. “Women have been held back from leadership roles historically, but that is definitely changing.”

White said she was inspired to run for public office from her work as a financial advisor, where she saw what a struggle it was for families and small businesses to manage the high costs of healthcare and education. She hopes to see many more women representing their communities in the state Senate and House of Representatives in Harrisburg in years to come.

“We make up more than half of the population, but we never have half of the representation in government,” she said. “And to all those young women thinking they would like to see that change, I hope they will get involved. You can’t win if you don’t run, as they say. So I hope this trend continues.”

White said she can see where women are hesitant to run, given that women currently only make up about 26 percent of Pennsylvania’s House of Representatives and Senate — combined.

“Public service, as in any other field, is more daunting for a woman if there are not as many women to guide you and help pull you up,” she said.  “But as more women get involved, it gives other women more confidence and builds that feeling of ‘I can do this, too,’ for little girls. As women, we have to support each other so we can keep this momentum going.”