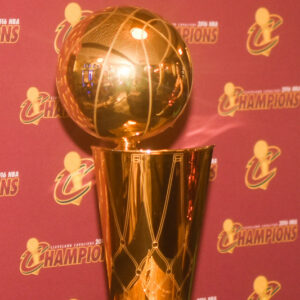 WATERGATE at 50: Watergate to NBA Champs — Say It Ain’t So, Larry

This week, the coveted Larry O’Brien Championship Trophy will be awarded to the winner of the National Basketball Association playoffs on a date that will overlap with the 50th anniversary of the historic break-in at Larry O’Brien’s Watergate office in Washington.

What to make of this bizarre juxtaposition? Coincidence? Conspiracy? Or is something else worth contemplating?

O’Brien was a veteran Washington insider and powerbroker who served as JFK’s presidential campaign director, played a similar role in Lyndon Johnson’s campaign for president, and was about to do the same for Robert Kennedy.

Following the assassination of Robert Kennedy, O’Brien formed a consulting firm and soon landed a lucrative account as the Washington operative for Howard Hughes, the eccentric Las Vegas billionaire and longstanding supporter of Richard Nixon.

As journalist J. Anthony Lukas, writing in the New York Times, explained, “Two years of research and writing on the Watergate matter have led me to a hypothesis — which locates the roots of the burglary in the convoluted, decades-long relationship between one of the most powerful men in the land, Richard M. Nixon, and one of the wealthiest, Howard Hughes. Specifically, I believe the Nixon forces were trying to determine what the Democrats and their allies knew about some very shady dealings between Hughes and Nixon, particularly $100,000 passed from the multimillionaire to the president’s friend Charles (Bebe) Rebozo.”

When NBA owners sought in 1975 to hire a new commissioner, it made sense to select a savvy, politically connected  Washington insider. The NBA was eager to grow its product into a multi-platform global entertainment juggernaut, and O’Brien was perfectly positioned to assist, smoothing the merger with the American Basketball Association, overseeing the adoption of the three-point shot, and negotiating lucrative TV contracts.

That O’Brien’s previous posting was as chair of the Democratic National Committee, a position he held on June 17, 1972, when the Nixon undercover operatives known as the Plumbers attempted a risky late-night break-in of his Watergate office … well, chalk another one up to strange bedfellows even if it’s the same fellow occupying two strange beds.

Gordon Liddy to Martha Mitchell to Robert Haldeman to Robert Maheu to Larry O’Brien to Larry Bird to LeBron James to Steph Curry to Larry O’Brien. A fun exercise in trivia, yet there hardly seems to be any meaningful through-line.

The NBA, like all commercial sports, is show business. As devoted fans appreciate, these thrilling events are no mere entertainment. Their beauty, their glory, their astonishing popularity derive from the fact that they’re real-time, high-stakes competitions in which the outcome is unknown until the game is played. Scripted entertainment can never be so immersive.

Conversely, politics are high-stakes competitions in which the action is hardly visible. Except on rare occasions, political activity is largely shunned by fans … oops, I meant to say voters. We celebrate Watergate — and we’ll see plenty this week — as the political arena’s high-water mark of national audience share. The January 6 Select Committee can only hope for a fraction of such ratings.

And our fragile democracy, on this 50th anniversary of Watergate, can only hope to generate a fraction of the fervor and devotion the NBA regularly inspires among its loyal constituents.

Bob Katz is the author of five books, including the recently re-issued Elaine’s Circle: A Teacher, A Student, A Classroom, and One Unforgettable Year. He wrote this for InsideSources.com.