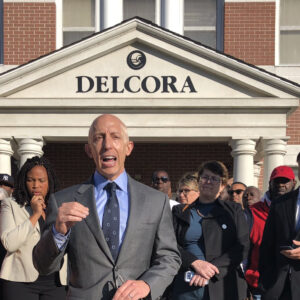 A vote on the hotly-contested sale of the Delaware County Regional Water Authority (DELCORA) to a private company was pulled at the last second from the Public Utility Commission’s planned agenda for Thursday, multiple sources tell Delaware Valley Journal. It’s just the latest example of the partisan political wrangling over this wastewater deal, which would be the largest privatization ever of a public water system in the Commonwealth.

The Republican-controlled County Council first approved Aqua Pennsylvania’s $276.5 million proposal to buy DELCORA in 2019. But when Democrats won control of the council in 2020, they reversed course. The new majority promptly filed lawsuits attempting to undo the deal, even proposing to dissolve the water authority entirely to prevent the sale.

Democrats say it’s because the sale was a no-bid, sweetheart deal to a company known for donating to the GOP. Republicans say Democrats see DELCORA as a source of valuable patronage jobs and want their turn at the trough.

For most residents, however, the politics are meaningless. They just want the water to flow without breaking the bank. That’s a challenge because the county’s wastewater system needs some $1.2 billion in upgrades and repairs, and the authority already holds some $150 million in debt. The GOP argues selling DELCORA gets ratepayers off the hook. Democrats say Aqua may keep costs low in the short run, but they’ll get their money from customers eventually.

“It shouldn’t be a surprise I’m against the sale of DELCORA — it’s not in the interest of working people or the public at large. It’s that simple, ” said state Sen. John Kane (D-Delaware County). “This would be the largest privatization of a public water or wastewater system in the entire commonwealth. Aqua would be taking over a public system five times Aqua’s current wastewater customer base. That’s good for Aqua’s shareholders, but it’s bad for the people of Delaware County. This sale risks major financial harm to more than 150,000 Pennsylvanians.”

“The whims of politics or changing county administrations do no waive away legally enforceable binding contracts,” Dozer said in the order. “The reliance and predictability of valid legal contracts is paramountly important and serves public policy.”

In January, however, a panel of administrative law judges came to the opposite conclusion. Siding with county Democrats, they recommended the PUC reject the proposed merger. They cited too many unmitigated issues and an unsettled legal quarrel. Many observers expect their ruling to carry a lot of weight with the PUC.

“We are aware of the administrative law judge’s recommended decision to the PUC, and we plan to file our timely exceptions in the coming days,” said Aqua Pennsylvania President Marc Luca. “We remain confident that a combination with DELCORA is the best outcome for customers and are optimistic that the PUC will realize the merits of the transaction, particularly the benefits to customers.”

But sources close to the deal tell DVJournal that Aqua is far from confident. Under normal circumstances, the PUC would have a 3-2 partisan make-up — in this case, one favoring the Democrats — and many observers believe partisanship would give Delco Democrats a win and reject the sale.

However, Gov. Tom Wolf’s nominee, environmental activist Haley Book, has yet to clear the GOP- controlled state Senate to take her seat. Book is a senior advisor to the secretary of the Pennsylvania Department of Environmental Protection and is a supporter of Wolf’s efforts to enter the Regional Greenhouse Gas Initiative.

The result is a 2-2 split, and an open question about how the PUC might come down on the deal.

Meanwhile, many residents are ambivalent about the sale.

“I don’t think many residents know much of what’s going on,” Delco resident Gina Berk told DVJournal. “I don’t want my bills to go up, and I like my services. I don’t care about the politics of it at all. All I care about is how much I’m paying and whether or not the services are okay.”

Aqua officials argue that if the deal had closed in 2020, DELCORA rates would have increased just three percent or so. But due to the delay, DELCORA customers got hit with a 10 percent rate hike.

Rates and continuity of service seem to be the most critical issues concerning residents. In terms of rates, DELCORA says it expects a 12 percent increase over a few years.

“For most customers, the DELCORA Customer Trust Fund will use the proceeds from the asset sale to provide payment assistance for customer bills,” according to a statement on Aqua’s website. “This fund will keep customer bills at a reasonable three percent annual increase over the next eight-12 years or until the trust fund money runs out.”

However, Delaware County officials say customers could see rates jump up as much as 70 percent once the trust fund money runs out.

“I’m always highly skeptical of when you take what should be a public asset, and you turn it over to private enterprise,” state Rep. David Delloso (D-Delaware County) said. “I’d hate to see the public give up such an asset.”

And when it comes to service, DELCORA does not expect anything to change. DELCORA serves more than 500,000 people and spans across 42 municipalities in Southeastern Pennsylvania. Aqua PA manages various wastewater treatment plants throughout the state, servicing more than 35,000 customers. They also provide water service to the bulk of the Greater Philadelphia area.

Despite the last-second delay, insiders say the PUC is still likely to issue a final decision by the end of March.

“I think public utilities should remain in public hands,” Kane said. “But if there is going to be any move towards privatization, it cannot go against the position of the ratepayers. I am introducing a Ratepayers Bill of Rights bill in the Senate, which would require a ratepayer referendum prior to a utility acquisition. This will prevent the kind of backroom deals that led to the proposed DELCORA sale and make sure the public still has a voice in the control of public utilities.”