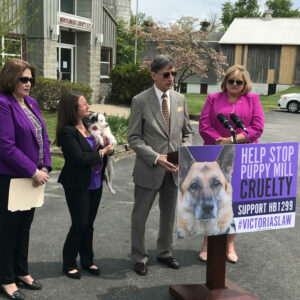 Victoria, a German Shepherd who was bred for 10 years by a puppy mill and passed down a genetic disorder to more than 100 puppies, is the poster dog for a bill to stop pet shops from buying commercially bred puppies, kittens, and bunnies.

State  Representatives Tracy Pennycuick (R-Montgomery) and Jeanne McNeill (D-Lehigh) recently discussed HB 1299, known as Victoria’s Law, at the Montgomery County SPCA in Perkiomenville. The proposal would prohibit the sale of dogs, cats, and rabbits by stores unless those animals came from shelters or rescue organizations. A companion bill is pending in the state Senate.

Pennycuick, who spoke with her service dog, Murphy, by her side, said she “values and respects dogs” and the “roles they play in our lives.”

She says she believes Victoria’s Law would help ensure that reputable breeders can continue, but will end “the deplorable conditions, overbreeding, and perpetuation of poor health traits for which puppy mills have become known.”

A combat veteran, Pennycuick suffers from PTSD, a condition Murphy helps her cope with.

“I can honestly say the impact she’s had on my life is profound,” said Pennycuick. “She has truly changed my life for the better.”

If passed and signed by the governor, Victoria’s Law would protect “dogs from deplorable conditions and overbreeding in what we’ve come to know as puppy mills,” she said.

McNeill is involved in rescuing dogs and said she’s seen terrible situations at puppy mills, including dogs with sores that were shaking and terrified. While puppies sold in pet stores may be cute, if they are from puppy mills a consumer can be stuck with huge veterinary bills.

“Enough is enough. We need to stop this,” said McNeill.

While Victoria has died, Herbert brought her current rescue pooch, Peach, to the press conference.  When she got her, Peach, was discolored from urine because she was in a cage with other caged dogs stacked above her and had never walked on grass before.

“This is something we have to fix,” said Herbert. “I am so thankful for every single legislator who is stepping up.”

“We want to stop puppy mills,” said Roy Afflerbach, of the Humane Society of the United States. While a previous puppy mill bill had passed in 2008, there are some 130 puppy mills operating in Pennsylvania, and puppies are also brought in from breeders in other states to be sold in pet stores here. Victoria’s Law would prevent those sales as well, he said.

Under Victoria’s Law, sellers will be required to include identifying information so consumers will have the protection of knowing where their pet came from. Dog breeders who sell directly to consumers would not be affected, nor would owners whose pet accidentally has a litter.

However, Bob Yarnall, president of The American Canine Association, said Victoria’s Law is unlikely to pass in this session.  He noted an identical law enacted in California had unintended consequences. It sent all dog breeders underground and resulted in puppies being sold online with no recourse for owners who buy a defective animal. Previously, California had a puppy lemon law to protect consumers, he said.

Already, Pennsylvania has the strictest laws for dog breeders in the nation. The breeders whose deplorable kennels were described during the press conference were not licensed, he said.

Licensed breeders are inspected by the United States Department of Agriculture and can face fines of up to $150,000 for repeated infractions. Also, in Pennsylvania, breeders must keep kennels climate controlled with a monitor measuring the air every 10 minutes for temperature, humidity, and ammonia levels he said.  When inspectors come for unannounced visits, they take a reading of the monitor. Owners can be fined $1,000 per animal for infractions, such as if the temperature is above 85.1 degrees.  These air quality rules are stricter than those for hospitals, nursing homes, and daycare centers Yarnall said. The Amish and Mennonite communities, which raise many dogs, have installed geothermal systems in their kennels to comply. And stacking cages is already illegal under current law, he said.

Meanwhile, Philadelphia and Pittsburgh have adopted ordinances similar to Victoria’s Law, according to Humane PA.