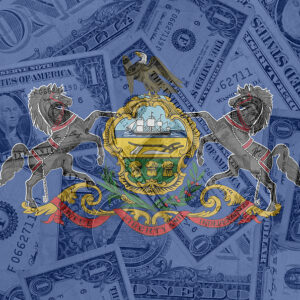 VAN DYCK: With $7 Billion to Spend, Lawmakers Must Avoid Past Mistakes

Devastating though it was to our state economy, the pandemic did not set the Pennsylvania state government back financially. In fact, our fiscal situation improved because Harrisburg has received $17 billion in total federal COVID relief and only lost a fraction of that in tax revenue.

While most of that money has been allocated, after the American Rescue Plan passed in March, the legislature was left with $7.2 billion to use at its discretion.

In the recent past, we’ve misused such money by viewing it as a winning lottery ticket to spend extravagantly. This year, lawmakers should use the funds prudently, for the long-term benefit of the state.

Pennsylvania has a structural deficit, meaning our government spends far more than it receives in taxes no matter how well the economy performs. The Independent Fiscal Office (IFO) projects the annual deficit to be two to three billion dollars over the next five years.

Last year, $1 billion of federal CARES Act money went to temporarily filling those huge holes. If we had a balanced budget before the pandemic, we could have instead used that money to support struggling small businesses or fund educational savings accounts for low-income families.

Looking back further, it’s evident that spending one-time federal funding on recurring expenditures has been a bad habit in Pennsylvania that we must break. Between 2009 and 2011, the state government, under Democrat Gov. Ed Rendell, used federal stimulus funds to increase the public education budget. When the stimulus ran out under Rendell’s Republican successor, Tom Corbett, funding for public schools was forced to decline (though not below its previous level). Nevertheless, Democrats accused Republicans of “cutting” billions in education and Corbett lost re-election to Democrat Tom Wolf in 2014.

The lesson is clear. If politicians use federal stimulus money to expand existing programs, their successors will face intense political pressure to make those spending increases permanent, compounding our structural deficit and piling bills on tax-paying workers and local businesses.

Instead, lawmakers should use the $7 billion to pay off our debts and fund one-time expenditures that empower small businesses and families. Creating new, unfunded liabilities for next year must be avoided.

Here are a few smart ways the money can be used.

First, fund kids. So far, most of the stimulus money has gone to public schools, despite many remaining fully or partially closed. According to a 2020 McKinsey report, American children lost over half a year of learning in 2020 due to the pandemic. We need to put money in the hands of parents who know what their kids need but cannot afford to provide it to them. To do this, lawmakers should fund Back on Track educational savings accounts (proposed by Senator Judy Ward) or kids’ 529 accounts, as in the Keystone Scholars’ Program.

Second, help small businesses and offer hiring and work bonuses. Pennsylvania’s draconian pandemic restrictions crippled small businesses, especially those that lack cash reserves and depend on in-person interactions (i.e., many restaurants and bars). A direct aid package would provide these businesses with much-needed relief. Given the scale of unemployment compensation under the Biden administration, far too many Pennsylvanians currently have an economic incentive not to work. State lawmakers can counteract this trend by offering bonuses to employers for hiring and to citizens for finding work.

Third, pay off the unemployment compensation debt. Since COVID hit, we have incurred $1.5 billion in unemployment debt to Washington. Paying it off would improve our balance sheet and keep the unemployment trust fund robust, minimizing the likelihood of job-killing payroll tax hikes in the future.

The federal funds sent to Pennsylvania are one-time handouts. Lawmakers have the right to use them—and the responsibility to use them prudently.

Brandon Van Dyck is a Senior Policy Analyst for the Commonwealth Foundation.