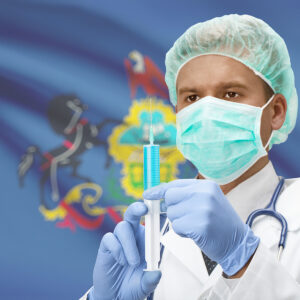 Since mid-April, the number of Delaware Valley residents lining up to get the vaccine has been slowly, but steadily, declining, state health department data show. It’s a sign that vaccine hesitancy is having an impact in Southeast Pennsylvania.

According to a recent NPR/PBS NewsHour/Marist survey on vaccine hesitancy, 30 percent of adult Americans do not plan to get vaccinated. Although those who hesitate mention differing concerns, Chris Hunter,  a Delaware County resident, said one reason he is skeptical is the profit-driven structure of pharmaceutical companies.

“It does concern me that citizens cannot sue these companies if there are any side effects,” Hunter said. “It doesn’t sound very reassuring. Do I personally believe that they are attempting to do harm? Of course not. I simply don’t believe it has been tested and proven well enough.”

The Chester County Health Department has been aiding Delaware County’s vaccination efforts, as well as those for Chester residents. As of April 23, 60 percent of all Chester County residents 16 and up have received at least one dose of the Moderna or Pfizer vaccine.

Asked about vaccine hesitancy and decreasing vaccination rates, a Chester County spokeswoman said, “Our numbers for vaccines have not decreased over the past few weeks and currently we are administering between 2,300-2,400 vaccines a day, Monday through Friday – Moderna and Pfizer first and second doses. Our appointments are matching the number of doses we have available to administer.”

However, data at the Pennsylvania Department of Health tell a different story. Daily distribution in Chester County peaked on April 1 at 7,104 and has been trending slowly downward since. After a two-day average of 7,078 at the beginning of the month, the number three weeks later was 6,251, a 12 percent drop.

The same trend can be seen in Bucks, Delaware and Montgomery Counties as well. All three saw vaccine distribution peak in early to mid April, only to steadily decline. In Bucks County, for example, the two-day peak was April 8-9, during which it administered 14,922 shots. Two weeks later, that number was down to 13,789 — a decline of 8 percent, even as eligibility for the shots expanded.

The downward trend is even stronger in Philadelphia, where the Department of Public Health’s vaccination partners have been experiencing fewer vaccination appointments which prompted them to expand eligibility earlier than they originally planned.

“In order to ensure that we could fill those slots, we opened up to Phase 2 – eligibility for everyone in Philadelphia over the age of 16 – and have been working to continue to encourage folks to sign up for appointments and walk up for the vaccine,”  said James Garrow, Philadelphia communications director.

The Philadelphia DPH has been encouraging more vaccination sites to adopt a walk-up model to make it easier for people to get the vaccine, Garrow said. This model could mean the difference between a hesitant person getting the vaccine or delaying it.

“We have more than 270 sites in Philadelphia that are giving out vaccine actively, and it’s our goal to have them available in as many neighborhoods as possible so it’s easy for folks to get there,” he said.

However, for people whose concerns match Hunter’s, it isn’t a matter of access or feasibility.

“It appears that there isn’t much evidence that the antibodies created by the vaccine are long-lasting, either,” Hunter added. “Drug companies create medication to elevate symptoms, not cure. It’s not cost-effective. I am quite skeptical about their motives.”

According to recent data from the CDC, more than five million people have missed second doses of their Pfizer or Moderna vaccines. As more emphasis is placed on high school and college students receiving their vaccines, the rate at which second doses are administered might falter as many college students return home as summer approaches.

Some of this decline, though not all of it, could be explained by the CDC’s decision to temporarily halt the use of the Johnson & Johnson vaccine. Last Friday, the CDC cleared the shot once again, and on Monday, the Chester County Health Department announced it is reopening appointments for two new large vaccine clinic sites that will administer the Johnson & Johnson vaccine: The Exton Square Mall and Longwood Gardens.

When asked if he would be receptive to a COVID-19 vaccine in a year or two once a longer safety record is developed, Hunter remained skeptical, citing a disagreement in the scientific community about letting the population get the disease and creating natural immunities to it or quarantining and developing a vaccine.

“I’d like to explain that I am a recovering addict of prescription medications, Hunter said. “I believe people are stronger than they believe they are and I’m concerned with how heavily we rely on pharmaceutical companies.”