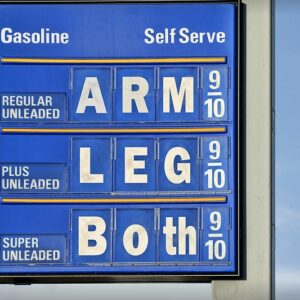 Posted to Politics May 27, 2022 by Ben Ulansey
As the school year ends and families head off on vacation, gas prices are hitting heights not seen since 2008.

“Adjusted for inflation, the real cost of a gallon of gas from July 2008 shoots up to $5.37 in today’s dollars,” Fortune.com said. According to AAA, the average price of unleaded gas hit an all-time high of $4.59 per gallon last Thursday. With inflation now hitting every sector of our economy, these rises in gas prices have been a hit many families can’t afford. Residents across the Delaware Valley are expressing their frustrations.

“I commute either 25 minutes to work or 30 minutes to school every day of the week, and ever since this rise in gas price, more and more money comes out of my pocket and into my tank,” said Elkins Park resident Eli Tomasic. “[these cost increases] have made budget increasingly hard to plan.”

The rise in gas prices has been enough to make many people alter their lifestyles. According to a survey conducted by Gas Buddy, 70 percent said their summer travel has been affected by inflation and high gas prices.

Another survey conducted in March by AAA found “of more than 1,000 U.S.-based travelers, 52 percent of them said they would take a family vacation during the summer – and 58 percent of those said they would adjust their itineraries if gas prices continued an upward trajectory and made it cost-prohibitive.”

As prices have continued to rise through April and May, many residents are trying their best to avoid its brunt.

“I find myself only filling my tank partially to avoid losing $50 bucks every time I need to fill up,” said Bri Bearden. “I used to not care about the price of gas, but lately I’ve been checking the prices of nearby stations every time I go.”

Some people are philosophic about the situation, but others see their livelihood eaten away.

“Even though gas has gone up $1 in the state in the last year, I haven’t personally found myself struggling at the pump,” said Abington resident Sean Dawson. “Even with gas being such a necessity, I personally haven’t worried much about the price, as I know I’m going to have to fill my tank anyway.”

Chester County construction company owner Tim Dilworth said, “We are a small residential renovation business. Our weekly gas costs have gone up by approximately $300. Our suppliers have almost doubled their delivery surcharge due to price of gas. Our subcontractors are all complaining about the distance of projects. The price of gas also impacts the cost of materials. Almost every product we are buying increases in cost almost every two weeks. It is becoming impossible to estimate projects due to material costs and other overhead costs skyrocketing. And, along with costs increasing there is a skilled labor shortage.”

On a recent trip to Japan, President Joe Biden said the high cost of gasoline is part of a “transition” away from fossil fuels. And Biden’s policies have reduced domestic oil production while the president asked OPEC to ramp up its production.

While higher gas prices might deter some people from traveling, Paul Bencivengo, vice president and COO of Visit Bucks County, said his organization is not seeing people canceling trips to one of the area’s most scenic tourist destinations so far.

He noted the group’s website has special officers for visitors.