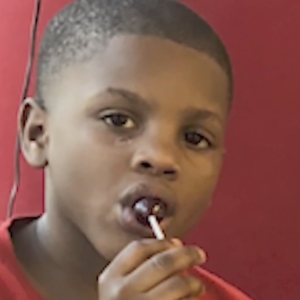 Seven-year-old Zamar Jones was shot to death while playing on the front porch of his West Philadelphia home, and the U.S. attorney says he knows who to hold responsible:

While three men are in custody for the shooting, U.S. attorney for the Eastern District of Pennsylvania William McSwain says one of the alleged shooters should have been behind bars. Instead Michael Banks was armed and on the streets because Philadelphia District Attorney Larry Krasner gave him a lenient plea bargain in 2019.

Police first arrested Christopher Linder. Later in the week Michael Banks, 30, and Damar Bashier Jones, 27, turned themselves in. The two men, who are both from Philadelphia, faces charges of murder, attempted murder, and conspiracy after allegedly shooting young Jones in the head on Saturday, August 1. Jones died from his injuries the following Monday.

McSwain says Banks was already under the control of local law enforcement in 2019 when Krasner’s office give him a plea deal dropping a serious firearms felony charge down to a misdemeanor. 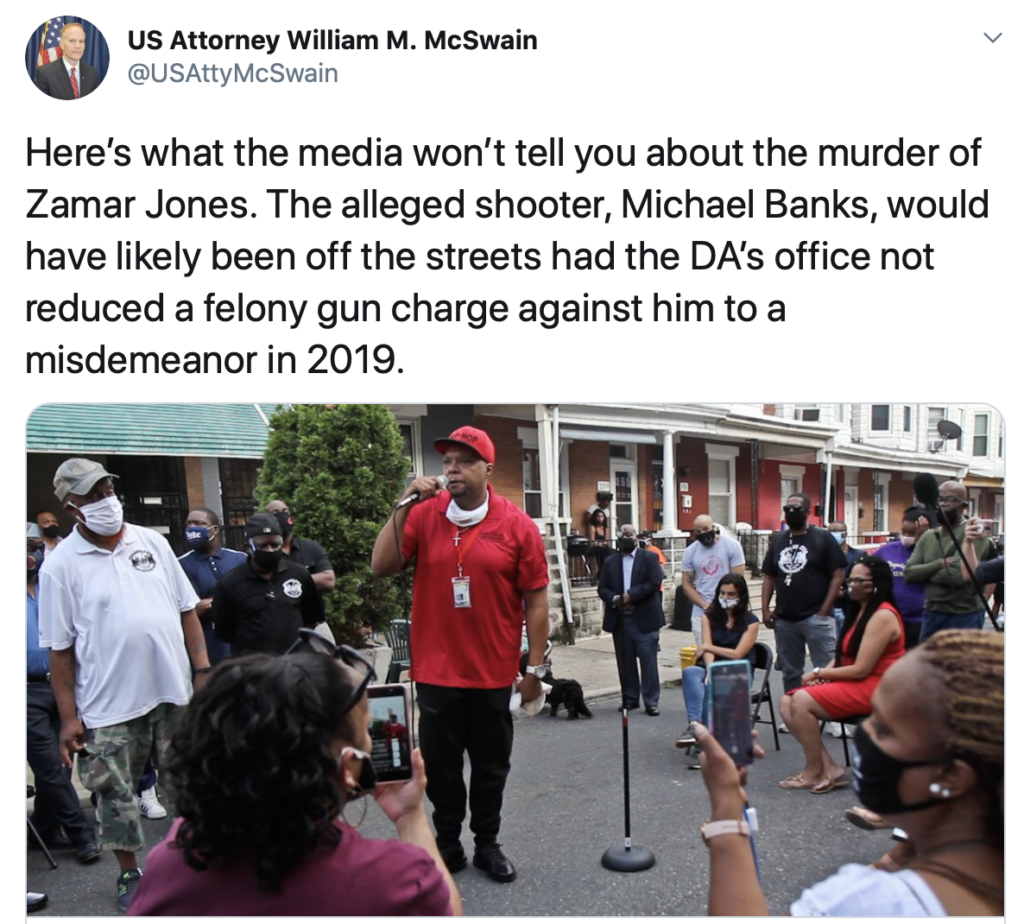 “Here’s what the media won’t tell you about the murder of Zamar Jones,” McSwain tweeted. “The alleged shooter, Michael Banks, would have likely been off the streets had the DA’s office not reduced a felony gun charge against him to a misdemeanor in 2019.”

“By reducing the lead gun charge against Banks for no reason, the DA’s office could then plead it out to nothing and Banks was immediately released — and the rest is history,” McSwain wrote. “The reason for the carnage is not hard to figure out.”

Requests for comment to DA Krasner’s office were not returned.

Krasner did comment shortly after the shootout that eventually took Jones’ life, however.

“I join Philadelphians across the city in expressing sadness and outrage that senseless gun violence has once again caused grievous injury to a child,” Krasner said. “Every kid deserves to live free of violence, harm, or fear. All children deserve an opportunity to develop and grow into healthy, happy adults.”

Philadelphia’s homicide rate had already been increasing for a handful of years before Krasner, who ran on a progressive platform, took office in January of 2018. But a spike in homicides — especially in 2020 — has alarmed many, including McSwain.

According to the Philadelphia Police Department’s own crime tracking website, homicides in the city are up 34 percent this year when compared to the same date in 2019.

The lowest annual homicide figure for the city over the last decade came in 2013, when 246 people were killed. Since then, the homicide rate has been on a steady climb:

“I would describe what’s happening in the city right now as an emergency,” McSwain said on Chris Stigall’s radio show. “This past weekend, over 20 people were shot. Two weekends ago, 25 people were shot in the city including 6 at a playground, which is very disturbing.”

McSwain’s numbers are slightly off and actually understate the problem. In the first weekend McSwain referenced, WHYY reported, “35 people were shot between 7 p.m. Friday and 7 a.m. Monday,” according to a PPD spokesperson, and seven of them died.

“We need a strong law enforcement response, and the weak law enforcement response we’ve had from the local prosecutors has greatly contributed to this emergency,” McSwain continued. “So, the federal government in the form of the U.S. attorney’s office and our federal partners are stepping in and trying to do everything we can to get this turned around.”

McSwain has been willing to direct blame at Krasner and his progressive policies before.

In March, McSwain laid the blame on Krasner for the fatal shooting of Philadelphia Police Cpl. James O’Conner IV when O’Conner was killed in a raid trying to take in a fugitive, Hassan Elliot.

“Elliott was on the street for one reason: because of District Attorney Krasner’s pro-violent defendant policies,” a statement from McSwain’s office said. “Those policies – which include permissive bail conditions for violent offenders, failing to pursue serious probation and parole violations by violent criminals, offering lenient plea deals for violent offenses, and outright withdrawing cases against violent felons – put dangerous criminals like Elliott on the street.”

Krasner ran on a progressive platform, and was aided in his campaign by donations from billionaire political activist George Soros. Soros has tried to promote numerous progressive DAs into office in the last four years, oftentimes pouring in large donations to independent expenditure groups at a point so late in the campaign that the opposing candidate has little time to react.

Since in office, he has routinely been hailed as one of — if not the — most progressive district attorney in the nation.

“He has instructed his team to avoid prosecutions ‘where appropriate’ to lower the incarcerated population, opting instead for a more liberal use of diversion programs,” a 2019 report fro NBC News noted. “At the start of his term, he fired 31 prosecutors in the district attorney’s office for their unwillingness to implement his changes and put 29 Philadelphia police officers on a ‘do-not-call list’ — meaning they could not be considered credible witnesses at trials.”