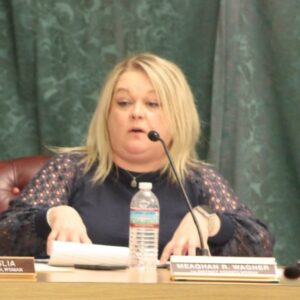 Upper Darby Councilwoman Meaghan Wagner filed a police report last Wednesday, alleging three people followed her from the Township Hall to her parked car, all the while shouting insults, slurs, and death wishes at the first-term council member.

Given that the three persons had reportedly just watched that evening’s council meeting, Wagner (R) believes the incident is evidence that passions and tempers continue to flare in the nearly six-month-long political battle between Mayor Barbarann Keffer (D) and a bipartisan group of council members who have launched an investigation into Keffer’s administration.

Broad + Liberty attempted to reach two of the three persons named in the report via Facebook Messenger. Because we can not be sure if the messages were received, and because no criminal charges have been filed as of yet, we are not naming the individuals in this report, and their names have been redacted in the police report provided to us by Wagner.

According to Wagner’s description in the police report, the cohort who followed her were two women and one man.

“Wagner further stated that (Person 2) yelled ‘I hope you die and get run over by a car’ while (Person 1) was yelling, ‘Die, die, die.’ Wagner was eventually able to get to her vehicle and leave the parking lot. Wagner appeared to be shaken up by this incident. This writer also spoke with Councilwoman [Lisa] Faraglia who confirmed Wagner’s details of these events,” the report said in conclusion.

Wagner declined to comment on whether any investigation beyond the police report was underway.

At the council hearing last week, when Rongione joined the council meeting via Zoom, the council first voted to expel him. When he refused to leave, the council took care of a small number of items and then voted to adjourn the meeting early in protest.

Wagner says there were several other witnesses in addition to Faraglia, and that the harassment is the first of its kind, at least in her new position.

A month after Wagner and others were sworn in, the political imbroglio began.

At a council meeting in early February, township Treasurer David Haman (D) gave a presentation in which he examined the fund balances in several accounts, and concluded that some of the balances were lower than they should have been.

Mayor Keffer and Rongione said the report was incomplete and part of an “ambush.”

Since then, battle lines have hardened.

A bipartisan group of six on the council, three Democrats and three Republicans, approved a forensic examination of the township’s accounts, with a special focus on federal funds the township received from the American Rescue Plan Act, or ARPA.

Keffer launched her own financial investigation conducted by national accounting firm Marcum LLP, and released the results last month. She and Rongione have touted the findings of that report, such as: “Despite numerous interviews, NO person reported or provided information alleging misuse of the ARPA proceeds.”

Additionally, a former finance director who left the township last year in good standing has said he has been cooperating as a witness with an investigation by the Delaware County District Attorney’s office that is related to the ongoing financial fight.

In early June, the group of six voted to fire Rongione, a move that’s being disputed and ignored by the Keffer administration. Rongione has continued to work while the group of six is striving for a court order that, if granted, would give legal backing to the vote to fire him, thereby terminating his official access to the township’s levers of power, including access to his office and email and the ability to sign checks.

The investigation authorized by the bipartisan group of six is still underway, with results expected this summer.

Through all of the investigations, the group of six have declined to authorize any further spending of the federal ARPA funds, something that has rankled Keffer, Rongione, and their supporters.

Faraglia said she’s relatively certain the alleged harassment was a result of the culminating political tensions.

“It’s a little bit of everything. It’s the financial investigation. It’s the hold up on the ARPA funds. It’s because we adjourned the meeting, because we terminated the CAO Vince Rongione,” she told Broad + Liberty. “It started inside our council meeting and escalated very badly, and then it continued outside. Um, I don’t think it’s safe anymore to even have residents at our meeting because of the way that they act.”

Wagner, meanwhile, said the incident will not deter her from her mission.