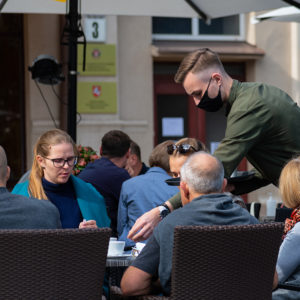 Vilnius, Lithuania - September 20 2020: Waiter with a mask serving at the table at an outdoor bar, caf or restaurant during Covid or Coronavirus outbreak
News

Restauranteurs in the city of Brotherly Love and the nearby suburbs are digesting the implications of a citywide mandate that requires customers to be vaccinated against the coronavirus in the new year.

Some fear the guidelines give suburban eateries an edge over Philadelphia competitors forced to impose the mandate. Others are more hopeful that the mandate, beginning Jan. 3, could actually boost business for Philadelphia restaurants by making concerned potential customers feel more comfortable dining out.

The Pennsylvania Restaurant and Lodging Association said about 30 percent of their businesses already required customers to show proof they were vaccinated to dine indoors before the mandate was adopted.

That could cut against the notion that they’ll be a great wave of diners hitting up the suburbs once the city’s vaccine mandate goes into effect. For the first two weeks it’s in place, customers also have the option of showing a negative test within the past 24 hours in order to dine in.

One industry watchdog says the vaccine mandate may actually encourage customers who felt unsafe dining to come out of their cocoons.

“The restaurants that were doing this showed that they were just as busy if not busier than places that weren’t” requiring proof, said Ben Fileccia, director of operations and strategy for the Pennsylvania Restaurant and Lodging Association.

The vaccination mandate is a better option than last year’s lockdowns which forced about one-fifth of Philadelphia restaurants to permanently shut their doors, Fileccia said. However, he acknowledged restaurateurs in the city “are rightfully concerned” after hearing from some venues that host large events who are seeing customers decide to shift those weddings, conferences, and parties elsewhere.

“Right now, if you live in Philly and you’re unvaccinated and don’t have a religious or medical exemption, your option will be to head to the suburbs to enjoy dinner out there,” Fileccia said.

That could change if other municipalities across the state follow suit and adopt similar measures.

The Pennsylvania Municipal League says some locales tried instituting vax mandates or incentive programs for employees to get the jab, but so far it hasn’t fielded a single call from anyone looking to enact its own dining-vax mandate

With more than a million residents, Philadelphia is the state’s only first-class city and may have more legal clout and autonomy to adopt and enforce stricter regulations than smaller municipalities, said John Brenner, executive director designate at the Pennsylvania Municipal League.

“Because of its home-rule charter, it would have some capabilities that other places may not have,” he said. “I’m sure it’s going to come up. There are a lot of questions like that we’re going to have to wrestle with.”

Pennsylvania has suffered more than 1.5 million infections and nearly 36,000 deaths from the coronavirus, according to state data. Of the nearly 7 million people fully vaccinated here, more than 1.2 million people are in Bucks, Montgomery, and Chester Counties, data show.

Eric Nagy, a spokesman for Bucks County, told the Delaware Valley Journal while there may be an appetite for a local vaccine mandate from people “on both issues,” it is “not something” county commissioners are contemplating.

That is reassuring news to people like Tom Darlington, owner of the Great American Pub in Narbeth, who called Philadelphia’s dining-vax mandate “terrible” for owners still recovering from the “irreparable harm” they suffered during the pandemic.

He feels the mandate will cause consternation for businesses negotiating an issue that has divided people along party lines. And, he said, the case could be made that the practice is discriminatory as vaccine hesitancy is higher among certain groups.

Darlington understands the argument that requiring diners to show proof they’re vaccinated is no different than some of the other health and sanitary rules and regulations that all eateries in Pennsylvania are already required to follow. But he still believes it comes down to people choosing what’s right for themselves. He mentioned two family members who died shortly after getting vaccinated. He couldn’t be sure whether their deaths were linked to their decisions to get vaccinated.

“Where do you draw the line?” he asked. “COVID is a killer. I’m not downplaying that. There are people who say, ‘Hey listen, I’m vaccinated. I want to go out and enjoy a good time that’s not dangerous to my family.’ … It’s a matter of control, and it all goes back to if you’re going to just mandate it for indoor dining, make it across the board for everything.”