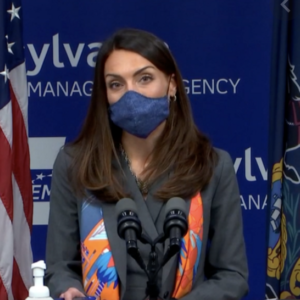 After weeks of pushback and complaints from Delaware Valley residents and legislators over an ineffective vaccination distribution strategy, the Wolf administration has relented. On Wednesday, the state announced it was abandoning plans for state-run mass vaccination sites and will instead ship vaccines directly to Bucks, Chester, Delaware and Montgomery Counties.

Acting Department of Health Secretary Alison Beam, joined by the bipartisan COVID-19 Vaccine Task Force, made the announcement and added more good news: All Pennsylvanians will be eligible to schedule a vaccine by April 19. Beam was quick to note, however, that an appointment isn’t the same as having access to the shot.

“It’s important to remember that eligibility does not guarantee an immediate vaccination appointment,” she added.

Pennsylvania House Human Services Chairman Frank Farry (R-Bucks) has been working to increase vaccine availability in the Philadelphia suburbs for months, and he welcomed the change. “The goal is to get shots to people who need them as quickly and efficiently as possible,” said Farry.  “We have been writing letters, joining in on conference calls, talking with the governor and his staff. Our requests have all be centered around certainty and accessibility for the vaccines.”

Like many Delaware Valley officials, he was critical of the mass vaccinations sites, referencing the distance people would have to travel, “especially those with disabilities and people who rely on public transit.”

Chester County Commissioners issued a joint statement expressing their support for the new approach.  “We are pleased that the State has been responsive to the feedback it has received, and has adapted its plans to allow us to manage our own vaccine distribution,” the commissioners said. “Our residents can now feel assured they will be able to get a vaccine without having to drive to a regional site. Next, we look forward to receiving confirmation on the quantity of doses that will be sent to us.”

Last week, the state House approved HB 63 by Rep. John Lawrence (R-Chester and Lancaster), which was amended by Rep. Megan Schroder (R-Bucks) to implement direct delivery of vaccines to counties.  “I have been advocating for additional local control of the vaccine distribution since this rollout began,” Schroeder said. “I introduced my amendment to House Bill 63 with this in mind and I’m pleased that the administration and the legislative task force has made this announcement.”

“The vaccine landscape continues to evolve as the federal government is increasing allocations to more retail pharmacy chains across the country,” Beam said. “To ensure that vaccine continues to get to people efficiently and equitably, Pennsylvania is adapting its plan to allow workers in targeted industries to access any of the three vaccines available at providers throughout the state, and to accelerate our eligibility for remaining phases of the state’s vaccination plan.

“President Biden has asked us to make every adult eligible for vaccination with the vaccine he is providing,” said Sen. Art Haywood (D-Montgomery and Philadelphia.) “We can do it, we can make the change. We can get more vaccine to Southeast Pennsylvania and across the commonwealth and target vaccine, so no one is left out.”

Haywood is the only COVID-19 Vaccine Task Force member from southeast Pennsylvania. Farry said this hasn’t been an issue from his perspective as he and other elected officials are in regular contact with task force members who understand the region’s problems.

Wednesday’s announcement came with news Pennsylvania is rising up the state rankings for vaccine distribution to number 20, ahead of neighbors like Ohio and West Virginia, though behind New Jersey, the third-most successful state at distributing the vaccine. On the metric of percentage of the population that’s been vaccinated, however, Pennsylvania lags in 33rd place.

And there may be more challenges on the horizon, public health officials tell DVJournal.

Many counties, particularly in the Delaware Valley,  still need a significant supply of doses to vaccinate 1A eligible citizens. They’ll likely still be doing so when the 1B and 1C populations reach eligibility.  This could lead to some vaccine inequities across the Commonwealth as some counties trail behind.

As of Wednesday, the vaccine rollout plan looks like this:

▪ April 19 — All Pennsylvanians eligible to make appointments for vaccination.

Looking to schedule an appointment for a vaccine? Use this link from the Pennsylvania Department of Health to find a provider near you.